What If Einstein Was Wrong?

E=MC² — NOT?  I’m not sure if you heard or not, but light might be losing it’s #1 speed-ranking.  An international team of scientists are suggesting that they have found something faster than light, some sort of sub-atomic particles.  If they are right, Einstein was wrong. 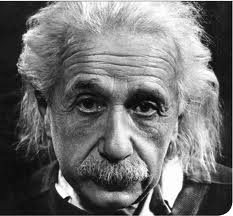 One of Albert Einstein’s long-accepted fundamental laws of the universe is that the speed of light is a cosmic constant and that nothing is faster.

Wow.  If this is true, just imagine how many sci-fi movies and books would become obsolete.  We will never again be able to use the phrase “speed of light” as a descriptor again.  You’ll be at a Penn State football game watching Devon Smith outrace another defensive back and you’ll say, “Wow, he’s faster than the speed of light.”  And the person next to you will say, “That’s nothing, have you heard about those sub-atomic particles…?”

One international scientist declined to speculate on what it might mean if it’s true. “I just don’t want to think of the implications,” he told Reuters. “We are scientists and we work with what we know.  …conceptually it is incredibly important. The finding is so startling that, for the moment, everybody should be very prudent.”

I’m not a physics-guy, but I think I understand his struggle?  So much of what he knows about the physics of the world is based on Einstein’s equation, that if Einstein’s formula is wrong… well if it’s wrong, his physics-world is suddenly turned upside down.

So here’s my question, what formula’s are you following?  What if that formula is wrong?

I think the church-world might be building life on some wrong formulas.  For example, “the safest place in the world to be is in the center of God’s will.” Commonly expressed as ME + GW = GL  (Me + God’s Will = the Good Life). Or how about GB = MC² (God’s Blessing = Money x Comfort Squared).

The problem with both of those formulas is that God becomes a means to our end…and when we don’t end up at the ending we desired, God becomes suspect.  God where’s my good life?  Don’t you love me?  Maybe God isn’t good or God isn’t great.  Or maybe I’m no good.  God why won’t you bless me?

But with further research we discover that sometimes (in fact maybe oftentimes) in this life, those who follow Christ, follow him into sacrifice and danger.  Which will frequently lead us to the startling find that money and comfort are often not a blessing at all.  Put both of those together and our picture of the good life might find itself turned upside down.

What formula’s are directing your life?