I don’t think I could play golf.  Take that back, I can’t play golf.  On the rare occasion that I do play golf I keep score by the number of balls I lose…or find while I’m looking for balls that I lost.  In other words, if I tell you that I’m “one under” on the day what I really mean is that I found one more ball than I lost.  But enough about my golf game — meet Zach. 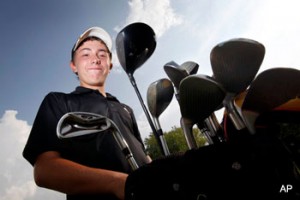 14 year old Zach is a pretty good golfer — good enough to win a Junior Wisconsin PGA championship.  After receiving his medal, he was in the club house celebrating and having a soda with his mentor, when his mentor happened to count Zach’s clubs.  Zach had 15 clubs in his bag, the limit is 14 clubs (Rule #4 of 6791).  This is the “I don’t think I could play golf” part — way too many rules — although when I golf I only use three clubs, 3 iron, sand wedge, and putter.  Apparently if you carry more than 14 golf clubs, you get penalties…in addition because Zach didn’t realize he was carrying 15 clubs, he also signed his scorecard with the wrong information, sans penalty strokes.  All of this simply means that by the letter of golf-law, Zach should be disqualified.

Zach had a perfectly good reason for the presence of that 15th club, and the 15th club did not factor into his ability to win, and the only person who knew was his mentor.  But Zach immediately called up the tournament officials, cited his disqualification and took back the medal.

Here’s the deal, some are placing Zach in the sainthood line-up, touting his integrity and honesty.  Some are taking the opportunity to talk about inane golf rules ruining the game.  Some are quoting golfing legend Bobby Jones.  When celebrated for calling a penalty on himself at the 1925 U.S. Open, Jones replied: “You may as well praise a man for not robbing a bank.”  In other words, don’t make such a big deal out of what should be expected.

It paints a picture of what Jesus meant in the gospel of John, when he said, “If you love me, you will keep my words…follow my ways, do what I say.”  Many of the decisions we make in life — especially the integrity decisions, the ones that direct our hearts and souls — come down to the question, “Who am I trying to please?”  Whose opinion matters to you today?