Okay, before you read any farther, it’s confession time. 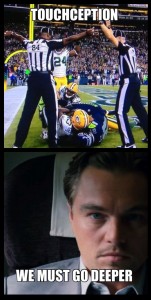 #2) I smiled, okay grinned when I first watched the replay of the ref-replacement-ELE (Extinction-Level-Event).

#3) Yes I agree it was a bad call, that’s partially why I smiled.

So here are my thoughts are this end of the Mayan-world event.

Keep Calm.  The NFL will survive.  If it doesn’t, we will.. I know those of you reading this blog are calm.  It’s not a big deal to you, but wow, it sure was to everyone else.  Twitter almost exploded.  Political candidates were giving input.  NFL Replacement-Prohibition laws were being formulated in Congress.  Football players were considering boycotting the first play of every game from now till the “real” refs come back.  And Facebook’s stock plummeted.  (Okay that one might be unrelated.)  I know it’s a huge business but it’s still a game, that’s why they play it.

Humor Helps.  One status update read, “Call Liam Neeson, the refs have been taken.”  That one made me smile.  The KFAN parody “Call It Maybe” made me smile two or three times.  The eye clinic with the neon sign, “Free Eye Exams for NFL Referees” was cute.  The New Yorker had a story that started with, “G.O.P. Presidential nominee Mitt Romney finally got some good news today as he found himself ahead of President Obama in a poll of N.F.L. replacement referees.”  That was humorous, but I have to be honest a few of the replacement ref memes made me laugh out loud.

Life Requires Grace.  I agree, bad call.  Unfair.  Messed up ending.  By the way, I’m sure glad that my mistakes aren’t replayed over and over again on a jumbotron that’s a thousand square feet huge.  So what do we need when we’ve messed up big time?  Grace.  And who better to give grace, than those who have been wronged.   I truly hope that somewhere on one of these NFL teams there is a person who has received enough grace to go up to a replacement ref after a game and say something like this, “Man I know you guys are doing the best you can.  Thanks for hanging in there when the whole world is yelling at you.”

It’s Not Funny for Someone.  I’m trying to imagine what it’s like to be one of those guys.  Yeah I’m laughing at the memes but it’s not funny for someone.  Some one out there was looking at this as the opportunity of a lifetime, but now they are facing the wrath of the American male.

Of Course I Would Be More Worked Up If…  I was a Packers fan.  I know.  Do you know how I know?  Because I remember a game in 2010, Vikings vs. the Packers, TWO Vikings touchdowns were recalled and Carl Johnson, the NFL Vice President of Officiating came out the next week and acknowledged that on at least one of the calls, the refs (regular refs) had made a bad call.  Should have been touchdown Vikings.  Should have been victory Vikings.  It happens.

The Packers Season Is Just Beginning.  That is if they are still championship material.  Champions will look at things like eight sacks, and a stalled final drive more than the officiating.  I’m fairly certain that’s what the Packers will do…though as a Vikings Fan, I’m hopeful that they will focus more of their attention on the refs.  :)

Last Thought.  This one isn’t fair.  It isn’t fair because it contains a teaspoonful or two of hypocrisy.  The hypocrisy is that if this had happened to the Vikings I would have been yelling as loud and tweeting as hard as a Packer.  And it isn’t fair because most people, even in their annoyance are just having fun.  They do indeed know that replacement refs are not an extinction-level-event and that football is just a game.  So I realize that this statement is a bit unfair, but it’s still the one that I will leave with us.  I wish we could regularly get that excited about something that matters…a lot.

May the Packers win the rest of their games this season…except for the times they play the Vikings…  :)