Judgement Day #3 — Random Thoughts on May 21 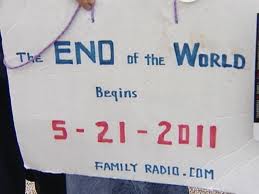 So most of the people who read this blog know that a man named Harold Camping has discovered that Jesus will return on May 21st.  So I just thought I would take the opportunity to share random thoughts on May 21st.  Ready?  Here we go…

1. On May 22nd, more than a handful of people in the world are going to be disappointed…that Harold Camping is still here.

2. My daughter Katy flies home from Bethel University on May 21st.  She was going to come home on the 20th, but I found that the flights were much cheaper on the 21st.

8. Harold Camping very clearly states that the Bible Guarantees May 21st as the day of Christ’s return, which simply means that if Jesus doesn’t return on May 21st, it’s not Harold’s fault that the Bible was wrong.

9. In a Family Radio memo — Camping’s Radio Stations — sent out to employees this year, Thanksgiving and Christmas 2011 are still listed as employee holidays.

10.  Harold Camping is almost 90 years old.  I bet there are a lot of 90 year old guys who have said things that made people shake their heads and grin.

11.  Getting the word out about May 21st has been an international effort for Family Radio.  216 radio stations in the U.S. shortwave radio, satellite broadcasts, a Web site, 5,500 billboards (400 in India; 2,200 across the United States) and 100 million pamphlets in 61 languages, according to the ministry.

12.  Setting dates carries with it the danger of an attitude that says, “Jesus is coming — look busy.”

14. Harold Camping likes math.  He graduated from UC Berkeley with a BS in engineering.  He views the Bible as a code to be cracked.  I wonder if a focus on the code leads to missing the narrative of God’s story?

15.  The Bible in general and authors such as Peter, Paul and Jesus specifically make it incredibly clear that no one knows the date of THE DAY.  They also make it incredibly clear that we should live every day as though we might meet up with Jesus today.  Those who are following Harold Camping, with their eyes set on a date are going to experience confusion and heartbreak on the day after.  Those who are following Jesus with their eyes on him, only him — they will make a difference in the world… long after May 21st has come and gone.