I Wish It Was That Simple

A jury of his peers — who listened to and deliberated about the evidence — convicted him of 45 counts of child sexual abuse.  An adopted son has added his name to the list of victims.  A few people still declare his innocence, and though I don’t have God’s knowledge of what he did, the evidence seems overwhelming. 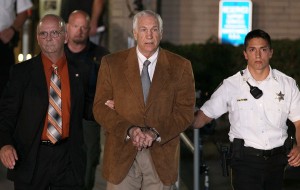 His conviction led to a plethora of the usual comments.  “I hope God has reserved a special corner of hell for Sandusky.” “I hope Sandusky stays alive long enough to get raped in prison.” He’s been described as beyond redemption, a calculating predator, a monster, and evil incarnate.

I wish it was that simple.

I wish I could put Mr. Sandusky in a box and dismiss him as an aberration of evil.

I wish it was that simple.

Because that way I could unleash my judgement and feel good about my anger. I could imagine what I would have done to him if I found him with my son.  I could feel good about the fact that I am so unlike him.  But the grace of Christ messes everything up.  The outraged Christian in me wants justice to prevail, but the Christ in me has a broken heart.

My heart is broken for the victims and their families…and my heart is also broken for Jerry and all the people who love him.  I hate the brokenness that sexual abuse brings into a life, but I am convinced that while justice should prevail only grace heals. The lawsuit money won’t heal.  A confession won’t heal.  But grace runs deep.

And listen, the grace that runs deep, the grace that heals is a messy grace.  It messes up my boxes and simple judgments.  If I believe in the theological concept of grace, then I am just as deeply in need of grace, as Jerry Sandusky; and just as desperately unworthy of grace as Jerry Sandusky.  Jesus didn’t die on the cross because I needed a little bit of grace; I was desperately in need of grace.  When Jesus said “It is finished” while hanging on the cross, he was announcing to his Father that the work of redemption was now complete, and that redemption plan includes Mr. Sandusky, if he calls out for the forgiveness and grace of God.  Some of us can’t imagine and don’t want grace to cross that line.

We all have lines.  It makes life easier.  If someone crosses the line, we can dismiss them and regardless of where we draw our lines, we all would agree that the sexual abuse of children is on the other side of every line that has ever been drawn.  But the grace of Christ crosses every imaginable line.  That kind of grace is beyond our comfort-zones.

Here’s the deal. If we want to live in a community that is saturated with the grace of God, we need to pray that God’s grace will overwhelm all the lines and all the mess and all the brokenness.   We need to pray that Sandusky will experience the same healing grace that all the victims of sexual abuse in our community need to experience.  I’m not talking about a cheap grace that is like a “get out of jail free” card.  I’m talking about the costly grace that requires repentance and is funded by the self-surrendered torture and death of Jesus.

Jesus says, “I will forgive you, that’s why I died.”