It took a few years, but a church in Sacramento apologized for messing up.  The Rev. Rick Cole stepped 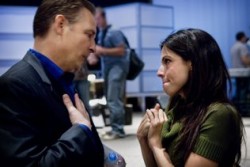 onto the podium on a Sunday last month, and stepped into the Sacramento church’s troubled past.  In front of a packed and stunned congregation, the senior pastor of Capital Christian Center apologized to anyone who had been hurt by the church, acknowledging the pain that church leaders had caused individuals and the community.

The pastor then mentioned two people “whose stories attracted national media attention and caused a lot of pain.”  Both were in the audience of 2,400 people.

One was Christina Silvas. In 2001, church officials asked Silvas to withdraw her daughter from the church-run school because Silvas was working as a stripper. On Sunday, Silvas sat with her daughters during the worship service.  Another was Ben Sharpe; Ben had been banned from his eighth-grade graduation in 1995 after getting a buzz cut.  School officials had prohibited Sharpe, an African American and a star student, from participating in the ceremony because his haircut violated school policy.

That decision in 1995 set off a media firestorm, with many accusing church leaders of racism.  Fourteen years later, Cole was making an emotional plea to Sharpe.  “On behalf of leaders who did not intend to betray Ben Sharpe and his family, but by our actions much pain was caused, I want to publicly ask forgiveness,” said Cole, struggling to control his emotions. “I also want to apologize to our community for the seeds sown of racial division.”  Cole left the podium, walked over to Sharpe and embraced him and his mother, Faye. The congregation rose in a standing ovation, many people reaching for tissues.

God opposes the proud but gives grace to the humble, so humble yourself before the Lord and He will lift you up.  (James 4).  God go to battle against the pride in my life, because I so want more grace.