911 Ponderings: What Do You Remember?

I remember that I was just driving into the church driveway a little after 9am, for a staff meeting.  I turned the radio on to hear that a plane had just crashed into the WTC. I sat in the car to listen, and within minutes heard that the second tower had been hit by a second plane. 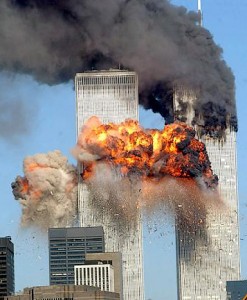 I came in and told the staff… before long the phone started ringing, the pentagon, bombs, terrorism.  Someone found a satellite news station and projected it on the screen in our worship room.  I walked into the worship room, the first tower began to slowly crumble.

I will never forget that picture, and many other pictures — snapshots of humanity etched on my mind — a couple holding hands as they jumped, the pentagon on fire, a crater in Somerset, PA, flags all over the place, — 88,000 sold nationally by Wal-Mart on that day — the changing of the guard at Buckingham Palace punctuated by the playing of U.S. national anthem, 100’s of people on their knees in prayer at the State College Assembly of God church, a midnight prayer vigil on Old Main with well over a 1000 students.

But — I know this will sound odd — but, the one of the most powerful images I remember from 9-11 was the image of a cell phone.   Plain cell phone, not a smart phone, just a tool of long distance communication.  People on planes and in buildings, people who knew they were not going to see the end of the day, what did they do? What was their last act? They connected.

Barbara Olson called her husband.  Jeremy Glick and Thomas Burnett called their wives before an attempt to overcome the hijacker.  Chris Mills talked to his girlfriend Danielle moments before the tower crumbled.
Mark Bingham received a final message from his wife…left on his answering machine.

They reached out to connect with people they loved…spouses, kids, friends, someone who could hear their last words, and what were those last words? “I love you. Tell my wife how much I love her. Hug my kids for me. Don’t be sad. Take care of our daughter. I love you.”

What we were given on 9-11 — among other things — was an intense momentary image to lead us to the questions like; What is it that carries ultimate value?  Is it the twin towers of financial success and upward mobility? Or is it a relationship with someone you love?  Billions of dollars were lost.  Businesses were damaged beyond hope. Wall Street ground to a halt and yet those things meant nothing.  What really matters?

For a period of time, we hugged our kids a little longer and a little harder.  We made some calls that we hadn’t made for a while…because we just needed to hear their voice.  We cried with strangers and we felt at times a desire to just connect with somebody.  That’s what I remember.

What do you remember?