When my great Aunt Anna died about 20 years ago, my father was the estate executor.  So we had this amazing opportunity to go through her house…and all her stuff.  When I was a kid, Anna was just crazy Aunt Anna.  She seemed ancient to us — never married, lived with her brother, equally odd Oscar.  Collectors of all sorts of odd stuff… stacks of magazines all over the house, cupboards full of old tv dinner aluminum foil plates, right next to antique china that was worth a small fortune. When winter blizzards would cause me to spend the night in town — for school the next day — I would stay in a bedroom with piles of ancient junk forming a path from the door to the bed. She made the best rice mush, played a mean game of whist, and frequently said uffda.

But that summer we sorted thru her stuff…I discovered her story. 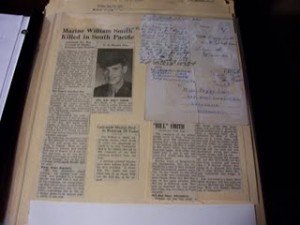 A scrapbook brimming with memories of WWII, letters to young men fighting the battle, obituaries of friends who never came back. Gas ration stamps, war bonds, food ration stamps. Letters to family left behind in Norway. Certificate of Baptism and confirmation.  She was a woman who faced great loss. A woman who made great sacrifices for her friends, her community and her country. I wonder if she ever struggled with a lifetime of singleness?   She was a person of deep Lutheran faith, and often someone who was the life of the party.

Do you realize?  You don’t know the whole story…anyone’s whole story, even your own.  We only see a portion.

Even here at Calvary — Do you know the woman who’s grandparents were missionaries to Egypt. Responsible for starting an underground seminary and dozens of churches.

Did you know that we have in our midst at Calvary many people who have experienced God at work in their hearts to deliver them from addictions to alcohol, drugs, pornography?

Did you know that we have a young man who listened to God’s call to study Chinese in Beijing in the hope of serving pastors in  underground seminaries?

Did you knw that we have a man and wife who led a church in downtown NYC…a church that reached out to under-served people with great needs?

Do you have any idea how many people at Calvary have opened their hearts to children from around the world?

Do you know that we have a woman at Calvary who has struggled through a horrific past, one that would leave you shaken?  She has worked her way through and in the process fell in love with Jesus.

Do you know the young lady who is from Pakistan?  Her father and a brother are pastors there in a place where being a Christ-follower might cost you your life.

I could keep going…with ease.

But you know what? You don’t know the whole story, not even your own. Because you aren’t the author God is. You only see a portion. Whether the chapter you find yourself in is awesome or awful… just whisper this to yourself…