The School of Paterno 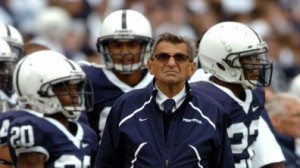 My first significant introduction came in the 1986 season, mostly through the national championship game against Miami.  I was cheering for Penn State, but primarily because I hated Miami, not because I loved Penn State.  But as a former linebacker and at that time current college football coach, what wasn’t too love about Shane Conlan and Coach Paterno.

When I interviewed for the job of lead pastor at Calvary, part of the interview was public q&a with Calvary folk.  I remember someone asking the question of title, “Dan what do  you like to be called?”  My response — without thinking — was, “If I could choose, my preference would be for everyone to call me coach, as coaching is my favorite model for leadership and ministry.”  Bob McClaughlin, a long-time member and former pastor, was the first to respond.  “Good luck.  In State College, there is only one coach.”

It seems like most everyone in State College has a Paterno story.  The last few days we have heard many of them.  Some of them have given us a peek behind the curtain.  Some have simply confirmed what we thought we knew.  Some of them have challenged us.  Some have caused us to laugh.  Many have in some way inspired us to look inside and ponder how we can make an impact in our world.

My Paterno stories are few and superficial.  In the first year or two that I was here a Calvary member invited me to a Penn State Quarterback’s Club luncheon.  That was probably the closest I got to Joe for any length of time.  I spoke at a football chapel or two, but he wasn’t in the room when I spoke.  I never shook his hand or spoke directly to him.  In the almost 18 years that I’ve been here, other than when I sat in the stands, I’ve seen Joe in person, just a few times.

But I think, better than a few momentary interactions, I’ve gotten to know a number of the people whose lives he impacted, mostly football players who attended Calvary, coaches who were a part of the staff, and a few Penn State leaders who worked with him.  As speaker after speaker, at the memorial on Thursday, reminded us… the legacy he left was in the lives he impacted far more than in the games he won.

That’s what has grabbed my attention the last few days, the legacy of influencing people for the good.  What does it take for us to leave that kind of legacy, live that kind of life?  You can’t live in State College for 18 years and be unaware of the impact of his life, but as his son Jay said it’s only in the evening that the full magnitude of the day can be evaluated.

As a coach, as a pastor, and as a leader I try to learn from those around me.  So as I was listening to the speakers at the memorial service, it was natural for my mind to be catching the lessons these men learned from the school of Paterno.  Perhaps some of you who read this blog and knew him far better than I will have far more lessons…but for the next few blogs I’m going to unpack a few of the lessons that I gleaned from those who went through the school of Paterno.