The Hole in Our Gospel — Part II

A few days ago, I mentioned this book that I’m pondering, “The Hole in Our Gospel.” 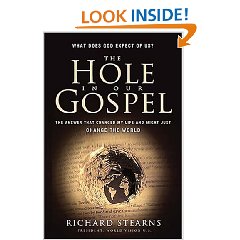 I mentioned that I would buy a copy for anyone who will make a commitment to do something with what they read.  One person has taken me up on the deal.  Let me know if you want a book.  Just wanted to share an excerpt of the book from Chapter Nine:

Whenever a major jetliner crashes anywhere in the world, it inevitably sets off a worldwide media frenzy covering every aspect of the tragedy.  I want you to imagine for a moment that you woke up this morning to the following headline: “One Hundred Jetliners Crash, Killing 26,500.”  Think of the pandemonium this would create across the world as heads of states, parliments, and congresses convened to grapple with the nature of this tragedy.  Think about the avalanche of media coverage that it would ignite around the globe as reporters shared the shocking news and tried to communicate its implications for the world.  Air travel would no doubt grind to a halt as governments shut down the airlines and panicked air travelers canceled their trips.  The National Transportant Safety board and perhaps the FBI, CIA and local law enforcement agencies and their international equivalents would mobilize investigations and dedicate whatever manpower was required to understand what happened and to prevent it from happening again.

Now imagine that the very next day, one hundred more planes crashed — and one hundred more the next, and the next, and the next.  It is unimagineable that something this terrible could ever happen.  But it did and it does.  It happened today, and it happened yesterday.  It will happen again tomorrow.  But there was no media coverage.  No heads of state, parliments, or congresses stoped what they were doing to address the crisis, and no investigations were launched.  Yet more than 26,500 children died yesterday of preventable causes related to their poverty, and it will happen again today and tomorrow and the day after that.  Almost 10 million children will be dead in the course of a year. 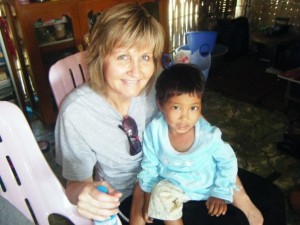 suggests that one reason might be the fact that the children who are dying… are not our kids.  But when we have a chance to meet these kids — it doesn’t seem like they aren’t ours, does it?  At Calvary we are studying our way through the book of James.  In James 1:27, the brother of Jesus wrote these words, “Religion that God our Father accepts as pure and faultless is this: to look after orphans and widows in their distress and to keep oneself from being polluted by the world.”

I think of we (Jesus-followers) took this to heart — much would change in our lives and in our world.  I think the two challenges are related.  If we would look after the orphans we wouldn’t get so polluted by the world.  If we weren’t so polluted by the world we would care for the orphans.  I think if we were known as those whose lives were marked by compassion and character, more than 3% of the next generation would find the church attractive.

How about you?  What do you think real religion is?