I was never really sure where the term “potluck” was birthed.  I just knew — growing up in a small, rural baptist church that we had a lot of them.  In our church there was often a rush for the front of the line, trying to 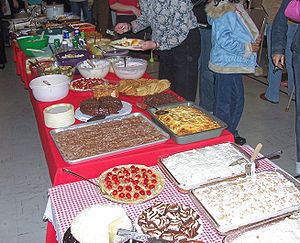 make sure we got to the good pots — Ella’s beans, Nancy’s chili, Mom’s corn souffle AND chocolate bars.  Of course everyone by-passed Ethel’s green potluck surprise dish, nobody ever felt that lucky.

So I always figured the term potluck, meant good luck if you’re last in line.  And in fact, wikipedia suggests that the word has English origins (late 1500’s) and probably meant whatever food one is lucky enough to find in the pot.  The term was frequently used in Inns and Taverns to refer to whatever food was available at a particular time or in a particular circumstance.

In time the term was adopted by small rural baptist churches all over the world, but when they adopted it, they added a very important component — sharing.  Now instead of potluck referring to what one poor traveler might find left to eat at the end of the day in a run-down English tavern, it referred to those wonderful meals where many people brought whatever they had — to share with others who brought whatever they had.

There are examples of this all over the place.  This last month America’s Giving Challenge teamed up with Facebook’s Causes to encourage MANY people to give LITTLE gifts to make a BIG difference.  In our church about 100 people potlucked their $10 gifts — to give $6700.  That will feed, clothe, educate and love on 25 kids in Myanmar for a whole year.  MANY LITTLES = BIG.

Last week Jon Acuff — writer of the satirical blog Stuff Christians Like — raised $30,000 in 18 hours to build a school in Vietnam.  It started when his 6 year old daughter saw a picture of a starving child and with a plaintiff cry said, “Daddy that’s not real is it?” (Read the article in the Atlanta Journal Constitution)  With that he decided to ask his blog readers to do something to help him make a difference.  He has about 70,000 monthly readers and with a bunch of $5 and $10 gifts, they raised $30,000 in 18 hours.  It came in so quick he decided to go for $60,000 and build two schools.  MANY LITTLES = BIG.

This weekend, if you are a part of the Calvary family you will get our ONE% offering booklet.  For the last two years, we have challenged people to give 1% of their annual income — in a single year-end offering — to make a big difference in the lives of children in Myanmar, Rwanda, and the Dominican Republic.  Last year we gave over $150,000.  MANY LITTLES = BIG.

Potluck Generosity — when a team of people decides that together they will do what they can, with what they have, in the moment they find the need.  Be in prayer about bringing your pot…(you know what I mean…) to God.