A couple of Thanksgivings ago, my mom and dad hosted a home burning.  The house I grew up in was 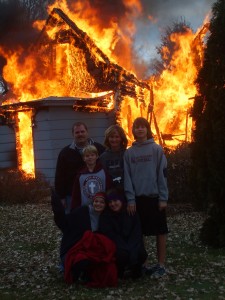 old before I was born and after seeing five kids go from the terrible twos to the rambunctious eight’s all the way through the mind-blowing teens — it was ancient.  When my grandfather died, they inherited his house (he built on their property) so they no longer needed their old home.  So they hosted a home burning.  They let the grandkids spend a day wrecking the house — a kid’s dream — then they started a fire.

I have to tell you it was a somewhat unreal experience standing around watching the home you grew up in burn down.  But it was also a fascinating experience to watch the fire.  It almost seemed to be alive, they way it moved, rolled, snaked around beams and enveloped walls.  And then it was done, the house was gone.  It didn’t take days, it didn’t even take hours — and it was gone.

I have those pictures in my mind this week as I read James 3:5-6.

In the same way, the tongue is a small thing that makes grand speeches. But a tiny spark can set a great forest on fire. And the tongue is a flame of fire. It is a whole world of wickedness, corrupting your entire body. It can set your whole life on fire, for it is set on fire by hell itself. (NLT)

I still remember words that hurt.  The burn can make a mark that lasts a long time.  The only thing that can heal this fire from hell is the cool water of grace.  The way you let that cool water flow is through forgiveness. Let it flow.