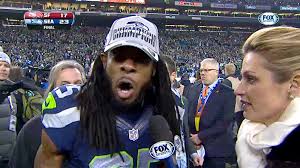 your team. If you are a 49’ers fan, you have at least one huge reason and many other smaller reasons to not love Richard Sherman. If you watched the NFC championship game of 2014, you saw Richard Sherman make the game-saving play–an amazing play–followed by a move that, if he were my son might have caused me to bench him for the super-bowl. (C’mon I said “might”) Then came the grand finale of an interview with Erin Andrews that brought back my childhood memories of Hulk Hogan in the WWF ring.

This was followed by all manner of facebook and twitter statements about the classlessness of Richard Sherman. In fact you can find a few tweets between Sherman and Crabtree. I didn’t make any e-comments, that I can remember, but I thought them.

Today I ran across this Sports Illustrated article, written last summer, on Richard Sherman, click SI:Sherman to read it.  It’s a good article which gives some context to the life of the man; it tells a bit of his story. After I read it, I thought, “If he was my son, I would still tell him he needs to control his mouth, but I would also be proud of many parts of his life.”

So it reminded me of one of the reasons we can’t judge people on the basis of what we see.  In the New Testament book of James, the author challenges our ability to judge others (chapter 4) and one of the reasons he gives is that there is only one judge (namely God) who is able to save and destroy. I believe that one of the principles coming out of this text is that there is only one who sees the whole picture, who knows the full story.

The reason we are not good judges of a life is that when we see the action of a person we see a small slice of small moment…we don’t see where they have come from or where they are going. We don’t see what outward or internal forces shape their responses.  We don’t see the totality of their hearts. We see more of the picture when it comes to our own actions, that’s why we are quicker to excuse ourselves, quicker to justify our own actions.

So yeah, if he was my son, I would tell him father to son, that he needs to master his emotions. The tongue is a far more dangerous weapon than anything the “legion of boom” can bring. But I would also tell him that I’m pretty proud of the good he has accomplished with his life.

After all, we are all a pretty mixed bag. Aren’t we.