A Waitress in NJ 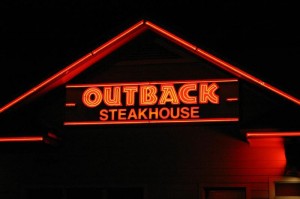 I imagine that somewhere in NJ there is a waitress who smiles every time she thinks about a father and his son eating their late night steaks. I’ve been thinking about this story for a few days. It was my one-on-one trip with Josh; Kingda Ka had already been conquered (read that story here), and we were just talking. I was asking my son questions, “Who is your favorite person in the Bible besides Jesus?” “David.” That launched us into a conversation on David and what Josh liked about David. Then another question, “What important things have you learned from me?” That took a little more thought from my son. He gave a few sports classics that I always teach my kids like… Practice, practice, practice, you will not get better without practice… and Being a good sport is better than being a winner.

I wanted to dig a little deeper. “What else have you learned from me about what’s important in life?” “Well Dad,” he said, “I think one of the most important things you teach us is that it is good to serve others, good to give to others. In fact, Dad someday I wanna be rich so that I can help a lot of people.” That answer pumped me up, I so much want my kids to grow up generous, servants, but I saw a teachable moment. That’s a great goal Josh, but you know what? You don’t have to wait till your rich to be a giver and a helper.

I proceeded to tell him how sometimes when I go out to eat to someplace like the Waffleshop, I leave a large tip. I explained how usually a normal tip is about 20%, so if my meal is only $6, if I leave just an extra $2 above the tip, I’ve given the waitress over a 50% tip. “How do you think that makes her feel?” A big grin of understanding lit up his face, “Pretty Happy!”

So there we are at a Outback Steakhouse in Hamilton, NJ, the last night of our trip. Outback is one of Josh’s favorites — he loves the bread! It’s a late dinner, got there around 9pm, so there aren’t too many people in the restaurant, especially when we are finishing up. Our waitress brings us the bill, and Josh grabs it before I can — a big smile of anticipation on his face — and says, “So…how much are we gonna tip her dad?” He starts by pulling out his calculator and figuring out a 50% tip. Remember this is Outback Steakhouse, not the Waffleshop. I negotiate down to about a 35% tip. He agrees, but then just as I’m signing the slip… He says, “Dad, I want to give her more. I’ll give $7 of my own money, please.”

How could I resist? We were right back up to about 50%, but my heart was even more full than my stomach. Josh was grinning from ear to ear and had learned something about the joy of generosity.

We left before she saw the tip, but I just imagine, somewhere in NJ, a waitress smiles every time she thinks about a father, a son, a light night meal, and a big tip!