So Lynn and I spent yesterday at our 25th College reunion at Bethel University.  It’s the first homecoming football game at Bethel that I’ve attended in about 20 years.  Football at Bethel has come along ways since I was there.  I played four years and coached three in the 80’s.  In my days, the field was barely two 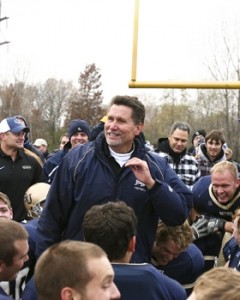 steps above a cow field, there was no grandstand, and the few fans in the stands were 90% parents and girlfriends.  (Thank you Lynn and Mom and Dad!)  Now there is a top quality field, a great grandstand, and stands filled with cheering fans.  So it was pretty cool to watch Bethel demolish Concordia (ranked top 20 in the nation) 29-10.

As I was watching the game, and talking to old teammates, of course our conversation frequently went back to “our days.”  We speak of of our days with a lot of laughter — but also I think with a deep sense of gratitude.  During the seven years that I played or coached we rarely won more than 3 games a year.   If all you looked at was the score, you would say that we were losers.  Now hear me — I love winning.  I’m not one of those soccer dads, or t-ball dads who found it easy to say, “the score doesn’t matter.”  I kept track of who won even when they didn’t keep track of who won.

But as I think back on those days of “losing” and I look at the friends I gained, the leadership and life lessons I learned, and the attitude of perseverance that began to grow as a habit, I realize I would not trade those years of Bethel football for 20 wins or a national championship.  As I hung out with these guys and listened to a bit of their stories, I told God thank you for the part that persevering through loss — with friends who were also teammates — played in my life.

I could take multiple blog posts and tell you stories about BJ and Jimmy, Curt and Collin, Randy and Lance, Mark and Bryan, Griff and Dale, Jim and Mike, and a whole bunch of guys that weren’t able to be there this weekend.  Stories about the good old days flowed freely, but it’s really the stories I see God writing in their lives right now that get me the most pumped up.  I know there were many influences that have shaped those stories through the years — but I can’t help but believe that 4 years together, working through the adversity of loss, played a part in all our lives.

One last thing — we prayed for Bryan McKay.  He was a roommate, a teammate and a friend.  He’s been struggling with cancer, brain and esophagus for about five years — and as one teammate said, “He has faced this difficulty with fearlessness and perseverance.  He is one of my current heroes.  He is a reminder to me that there are times when losing simply isn’t a game — but even in those times as a follower of Jesus, we can find the strength and the joy to fearlessly persevere.

So — for those of you who are PSU football fans.  Lighten up.  There are times when losing isn’t about you.  So what if you were disappointed.  There are around 100 young men who will have the opportunity to learn through their loss and who knows maybe God will begin to plant some seeds in their lives — through this loss — that are still bearing a harvest 25 years from now.  I think that’s even more important than beating Iowa.