It started when I did the math on a set of statistics detailing the financial resources that American Christians give to serve those in need around the world — I came up with 1/2 of 1%.  In that moment, I sensed God challenging me to do our part by doubling that stat, giving birth to our 1% offering. 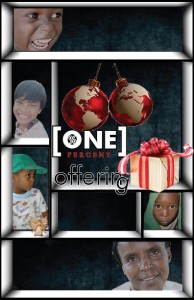 In his book, The Hole in our Gospel, Richard Stern suggests that if all you look at is the church, just giving to the church and by the church.  It isn’t even 1/2 of 1% — it’s 2% of 2%. The average Christian gives about 2.5% to the church.  The average church gives about 2% of what it gets to serve those around the world, both in terms of evangelism and helping the poor.  Do the math on that one and it comes out to about 5 ten-thousands of our income.  Stern says that if you look at the giving of the church in America we give about six cents per person per day to serve those around the world.  Six Pennies a day.

Here is my question: What if — this year — we gave 1% of our annual income to serve those in need around the world?  Calvary averages about 1200 people on a weekend.  The average personal income in Centre County is around $25,000 — yes that includes students.  So that would be on average $250 per person — average means that those who make more than students would give more than students. But if we gave 1% at Calvary that would be about $300,000.  Wow.

I remember one Christmas.  The boys got their first video game counsel.  I don’t remember if it was Xbox or PS or Nintendo, but I do remember the look on their faces.  It started with shock, then meandered over to disbelief and landed on pure exuberant, I-can’t-believe-I-got-this wonder and joy.

I wonder what the face of Jesus would look like?

If you are connected at Calvary, we are spending the next few weeks pondering and praying about this.  If you are reading this blog from afar, you can still join us.  Go to ONE%.  You can read this year’s booklet, watch a video and even donate online.

Once upon a time Christmas changed the world… it can happen again.