What Are Your Stories?

The Burmese people are one of the largest unreached people groups in the world.  27 million people 97% plus are Buddhist.   In terms of persecution the Joshua Project ranks them in the top 25 countries for the persecution of Christians.

While theoretically it’s legal to have a church and legal to be a Christian, practically it brings a host of potential difficulties and legally it is against the law to encourage others to become followers of Jesus.  This means that baptism is a big deal. It costs something to make a public declaration for Jesus.

But the good news is that around Christmas time, the government seems to relax a little and so the orphanages are able to serve their villages with a Christmas outreach.  They will go into a village, put on a Christmas presentation, someone will tell the people about Jesus and then they will feed the people who come.

So in December the orphanage we support chose two different villages to go into for their Christmas  outreach.  They arrived at the first village the night before but that night the devout Buddhists surrounded the home they were staying in and began to throw rocks at the walls and beat the walls with sticks.  Our team took that as a sign that they were not welcome so they left the next morning and they went to the second village.

The second village was more receptive.   So they proceeded to do their Christmas outreach.  After the presentation, one of the leaders (J) told the people about Jesus and Christmas and the power and love of God.  After this (J) was having a conversation with one of the men.  His name was (MS).  At one point in his life (MS) was actually a Buddhist Monk, his sons were in training to be Buddist monks.  But now (MS) works in agriculture overseeing a farm and fish ponds.  So (MS) was talking to (J), asking him about this Jesus and prayer and the power of God.  He told (J) that he had a pain in his arm and his side that was so bad that he couldn’t do his job.  He couldn’t oversee the fish ponds.  He looked at (J) and asked, “Do you think Jesus could heal me?”  (J) said yes, he gathered the team around and they began to pray.

He wasn’t healed and so he went away doubting in the reality of this Jesus.  But that night he woke up about 3am the morning and he had a vision of a bright light coming down through his house and covering his head and his arm and his arm was healed.

That same night one of (MS) sons was sleeping on the edge of a field miles away.  He was working in the field during the day and sleeping at the edge of the field at night.  That same night his son had a dream of a cross with a light coming from it.  He didn’t even know that (J)’s team was in his village.  When he came home he told his father about his dream.  His father told his son about his vision and his healing — and the whole family decided there must be something to this Jesus. 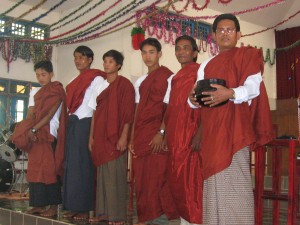 That day, he walked out on stage with his sons, dressed in their Buddhist monk robes carrying the traditional begging bowl, his begging bowl.

He shared the story of his encounter with Jesus, then he and his sons took off their robes, folded them up, gave them to me, and through an interpreter he asked me to bring them back to show others that Jesus has the power to change the heart of a Buddhist monk.  That Sunday I had the honor of baptizing (MS), his wife, four sons and one daughter. 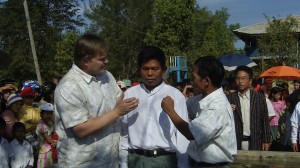 But you know what I love even more.  I love those moments that we (each of us) are given to be part of a story.   Here is my promise to you from God.  God isn’t through writing your stories and there are epic stories in which He has a part for you.  Just tell Him right now, you want to be a part of His-stories.  Who knows where his pen will take  you?