Last week I was in New York City attending a seminar on story-telling.  As part of the experience we went to the site of a story that has — in part — shaped our culture for the last decade.  We went through the World Trade Center Memorial.  Maybe I’ll talk about that experience later, but I wanted to set the scene. 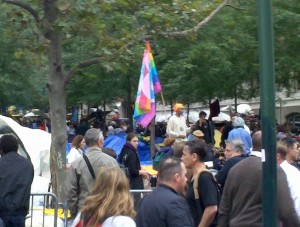 Right across the street was the Occupiers Camp — the Wall Street Occupiers.

It was an ironic scene.  On one side, the building of a memorial that was tied to the destruction of centers of finance; on the other side people protesting the current centers of finance.  But here is what I saw in common — both sides of the street were protesting a loss.  Hang with me.  Don’t be offended that I’m comparing the Occupiers protest to the World Trade Center loss.  I understand the difference.  But at the heart of both is a protest of loss — loss of life, loss of livelihood.

If you have followed the Occupier story, they finally came up with a slogan that has stuck.  We Are the 99%.  The back-story of the slogan is that the majority of the wealth and opportunities of our country is concentrated in the hands of 1% of the people. 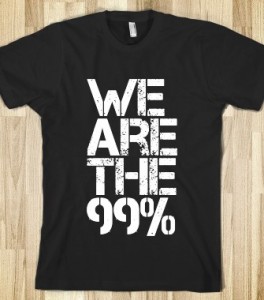 The Occupiers are crying out for greater opportunities for the 99%.  We Are the 99%.

If you have never run across the website Global Rich List click it and go there now.  Enter your annual salary and see where you rank.  My son’s summer job put him in the top 15% of the world.  If you make more than $47,500 you rank in the top 1%.  We are the 1%.

The 911 tragedy was exactly that.  So was the Indonesian Tsunami and the Myanmar Cyclone and the Haiti Earthquake.  The economic downturn has been a burden, even at times a devastating burden for many people.  But half the world barely survives on a dollar a day.  The Wall Street Occupiers are eating better than the refugees in Somalia.