Last weekend at Calvary we pondered together the story of a young boy who gave his sack lunch to Jesus so that Jesus could feed a crowd.  If you know the story, you know that all the people ate (most likely 10,000+ people) and they gathered 12 baskets of leftovers.  Evening came, the night went by, and the next day the people came looking for Jesus — big surprise huh?  “Jesus, what’s for breakfast?” Is what most of them were thinking. 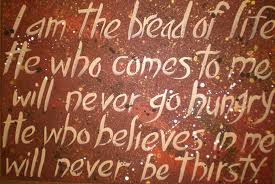 “We were here when you did the multiplying sack lunch thing and that was pretty cool.  What’s for breakfast? You gonna multiply eggs?”

And Jesus told them,  “You’ve come looking for me not because you saw God in my actions but because I fed you, filled your stomachs – and for free. Don’t waste your energy striving for perishable food like that. Work for the food that sticks with you, food that nourishes your lasting life…”  (John 6:26).  Then later (vs. 47-51) Jesus said,   I’m telling you the truth, whoever believes in me has real life, eternal life. I am the Bread of Life.”

Jesus is saying that in the end we’re all hungry.  We just don’t know what will satisfy our hunger.

A few years ago, Lynn and I were spending a couple of days with Calvary leaders praying, talking about, and seeking God’s leading for our facilities at Harvest Fields. It was an incredible time…but that night while we were out at Woodward, Lynn got a text from Jake.  Jake was playing rugby at the time.  She got a text saying, “Hey mom, I think I broke my nose, playing rugby.”  She came over to me — more than a little concerned.  “Dan, Jake thinks he broke his nose playing rugby.”  And of course I asked, “Yeh but who won?”  She said, “I don’t know I didn’t ask.” Typical mom.  So I texted him and got the news that they won and “Dad I played the whole game.”  Man I wanted to go home  and give him a man-hug.

So then about midnight, Lynn got a phone call from Sarah. “Jake isn’t feeling well. He’s nauseous, his head hurts. He’s really groggy.” So being a nurse Lynn knew that he was about to die and she wanted to go see him one more time. So we drove home to take him to the emergency room. He did have a broken nose.  They did a catscan of his head, but it showed there was nothing up there — I mean nothing wrong up there — so mild concussion and a broken nose, and we could have been in and out of the ER in no time flat.

But at about 1:30am the ambulances started coming in; 10 in less than an hour.  All or almost all of them were college students who had drank too much. They were packed in all over the place.  The halls were full of students on stretchers, many unconscious, some getting their stomachs pumped, some with adult diapers.  And as I was walking the halls looking, watching, it hit me…  THEY ARE JUST HUNGRY.

All the parties and drinking and hooking up, it’s all a voice crying out from behind walls, saying, “I have a hunger that goes so deep I’m not sure it will ever be satisfied.”  They don’t realize it, but what they are saying is God give me Christ. I need Jesus so bad. Nothing will fill this hole in my soul if I don’t get Jesus.

Last Saturday night, Lynn was over at our facility on University Drive, late at night, praying for Calvary, the community and our worship gatherings.  She got home about midnight and as we were settling in she said, “As I was praying, I felt like God was telling me that the church needs to wake up.”  We need to wake up to the desperation and the spiritual hunger, the soul hunger around us.  It’s not just the students, it’s all over.  We need to wake up and see our community from Father’s perspective.  He loves our community, but He loves it with His eyes open.  If we will do the same, I’m convinced it will lead us to pray like we have never prayed…which will lead to a feast, a spiritual feast in the valley like we have never imagined.

God wake us up.