What is the price of a friend? Apparently — for some — a little bit less than 1/10 the cost of a Whopper. In January of this year, Whopper conducted an “Unfriend” Whopper Campaign. Anybody willing to unfriend 10 people on Facebook would get a free whopper. 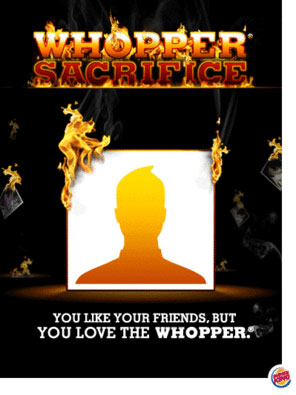 By the way, I looked, the application has been shut down by Facebook. But not before 23,390 Whoppers had been exchanged for 233,906 friends. (You gotta feel bad for that guy who sacrificed six friends and didn’t get a Whopper!)

So how would you feel if you were unfriended on Facebook, for two bites of a Whopper? I know…it depends. How close was the friendship? Did you do the same thing to 10 others? Do you love Whoppers? Do you ever use Facebook?

So here’s the minor point — every day we make value-based choices. The time we are willing to invest in a person, the decisions we make about being with or not being with a person, all speak to the value we put on friends.  Some will trade a marriage for a moment.  Others trade family for jobs.  Perhaps you found someone willing to trade a friend for a reputation.  It’s about values.

Here’s the major point — in the end I can’t control whether or not someone unfriends me for a Whopper. All I can control is what kind of friend I am. Which means the best question is not how many friends do I have, but what kind of a friend am I becoming.

Even if I am the victim of a whopper unfriending, I don’t want to be an unfriend.