The Receiving End of Generosity

So I am on a four month sabbatical and wouldn’t you know it… out of four months we could only find ONE week that the whole family could be together.  So a couple of weeks ago we headed to Florida for a week of family vacation.  While we were there a friend of ours from our first church treated us to a day at Discovery Cove. 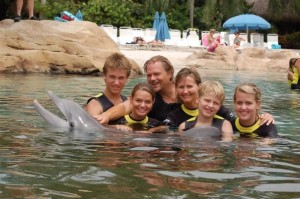 What an amazing day!  Swimming with a dolphin, feeding sting rays, snorkeling and not only that but he got us this little private cabana, the girls were in heaven. 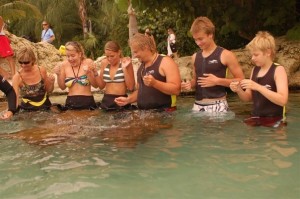 It was the highlight of our vacation and something that we never would have been able to do on our own.

This isn’t the only time that we have been on the receiving end of generosity.  In fact during my sabbatical, another friend has allowed us to use his mobile fastpass for gas, and another couple gave us the use of their summer cabin for three weeks.   Someone sold me two PSU football tickets for the price of one and another family let us use their boat for a family outing at Bald Eagle.  Nothing we deserved, just grace.

Have you ever been on the receiving end of generosity?  If you are a Jesus-follower, the only possible answer is yes.  Right?  Maybe you’ve never received a day at Discovery Cove, or a free week at a lake cabin, or a free pass at the gas station.  Maybe you’ve received gifts even greater.  Regardless of anything we have or haven’t received from people around us, the most amazing grace any of us have ever — could ever — experience, is the grace of God that we find in everything that Jesus is for us.

You are on the receiving end of generosity.  Don’t say no to Jesus.