The Only Things Certain in Life…

Are death and taxes…  At 11:39pm tonight I was on my way to the State College Post Office.  Last year when I went — a few minutes earlier — the police had pulled over a car right in front of the post office.  My heart immediately went out to him…as I held back the 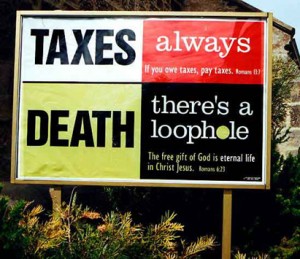 laughter.  It’s just not right to get a ticket while trying to get your taxes in under the deadline.

Benjamin Franklin was one of the first to put death and taxes together.  He wrote, “‘In this world nothing can be said to be certain, except death and taxes.”  But I disagree…there are other things just as certain as death and taxes… for example.

Those are just a few of the things of which I am fairly certain.  By the way,  if #10 is certain,  it means that loopholes exist — not just for taxes but also — for death.