The Epitome of Creation

I’m sitting here on the deck outside my office at Harvest Fields.  I’ve lived in State College for 17+  years and I would argue — with some passionate certainty — that the view from my office is as good as it gets in the Centre Region.  It’s early Saturday — early at least for me — and it’s the kind of morning I love. 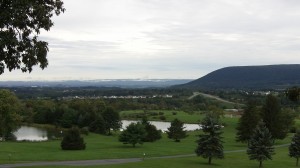 On the brisk side, air has zero humidity, could use a bit more sun, but it appears to be present and peaking through a thin layer of clouds.  Mt. Nittany is cut in half by a low cloud, and small flock of geese just deposited themselves in one of our ponds.  (They’ll deposit other stuff later.)

And in the distance I see the city.

Bryce Jordan and Beaver Stadium are prominent, but there’s more.  I can see the water tower up the hill from Hilltop Mobil Home park, a place we have served through the years.  I can see Mt. Nittany Midde School where each of our kids attended and now our foster child does as well.  I can see the hospital where Josh was born and many visits to people in need have been made. Through the trees I can see the general area where my house is and up from that the downtown strip and of course, a multitude of homes… Lemont, Liberty Hill, Willowbrook, Toftrees.

I see the city.

I think sometimes in PA, we forget that the most amazingly beautiful part of creation — in God’s eyes — isn’t the mountains, or the trees, or the way a cloud forms, or geese in a pond.  It’s the people.  Of no other part of creation did God stop and say, “This I will make in my image.”  That’s why heaven begins with a city.  The city of God will be a thing of awesome beauty and majestic grandeur because it will be filled with the epitome of God’s creation.

When Adam and Eve were kicked out of the garden of Eden, it was viewed as a curse, but the curse had less to do with leaving a garden place, and more to do with leaving God’s presence.  God’s ultimate dream involves drawing us all together in one huge city, where He will live with us.  God’s movement has always been from the garden to the city.

That’s the view from my office every day, from the garden to the city.  It’s a great reminder of God’s dreams for us, for Calvary, for our whole region.  It helps me pray.

This coming week will wrap up 21 Days of Prayer for Calvary.  We have been prayer walking Penn State University and the downtown area.  Asking God to do a great work in the hearts of the next generation.  On Sunday September 25th, we’re inviting the campus to come and join us in worship at Eisenhower Auditorium.  It’s going to be a great day, because from the garden to the city, people are the epitome of God’s creation.