This weekend at Calvary — as we continue to make our way through Mark’s Gospel — it’s all about the cross. I am arrested by the cross of Christ. 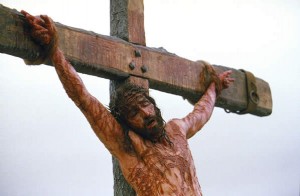 All four Gospels record the passion of Jesus, providing significant detail about the enormous suffering and torture He endured. Other Christian, Jewish, and Roman sources provide additional insight about scourging and execution on a cross. Those who study the details of crucifixion recognize that Mel Gibson — producer of The Passion — may have been right, when he responded to the question, “Why didn’t you hold back on the graphic violence of the cross?” with the words, “I did hold back.”

Crucifixion, which probably began with the Persians, was perfected by the Romans as a form of torture designed to produce a slow death with maximal pain and suffering.  It was one of the most humiliating and cruel forms of execution. Roman law protected Roman citizens from crucifixion, except perhaps in the case of the desertion of a soldier. Cicero wrote, “The mere idea of the cross should never come near the bodies of Roman citizens. It should never pass through their thoughts, eyes or ears.”

Today the cross is a common thing.  We wear it around our necks and have pictures of it in our dining rooms.  But it was not until the 4th century that the cross became a symbol of faith. As C.S. Lewis points out, “The crucifixion did not become common in art until all who had seen a real one had died off.”

Those who point out that the Bible does not go into a great depth of description of the horrific violence of a crucifixion, simply don’t remember the people in Jesus day knew the suffering that went with the
crucifixion.  They didn’t need to be reminded.

Survival on the cross lasted from 3 or 4 hours to 3 or 4 days, depending on the severity of the scourging.  Scourging usually preceded a Roman execution. The normal instrument was a short whip called a flagellum. It was composed of several single or braided leather thongs of variable lengths, in which small iron balls or sharp pieces of sheep bones were tied at intervals. The man was stripped, usually completely naked, and his hands were tied to a post. The back, buttocks, and legs were beaten or flogged, either by two soldiers called lectors or by one soldier who alternated his position from one side to the other. The scourging was intended to punish and weaken the victim to a state just short of collapse or death.

Because this was a Roman scourging, we cannot be certain that the number of lashes was limited to 39, which was the limit set by Jewish law. The severe scourging, with its intense pain and appreciable blood loss, most probably left Jesus in a pre-shock state. Moreover, hematidrosis had rendered his skin particularly tender.  So He hung there, slowly suffocating while enduring intense unfathomable pain…and then he died.

If you watched the movie, The Passion you have images in mind of this broken and battered Jesus.  It’s almost difficult for me to bring that vision to mind.  See Him hanging there, beaten, bloodied, disfigured.  Now think about this, there was a Roman solider who stood at the foot of the cross and when Jesus died…this broken, beaten Jesus died…that solider said, “Surely this was the Son of God.”

Isn’t that amazing?  He recognized God, in Jesus, on the cross.  Jesus transformed a Roman device of torture into holy ground, sacred space.

There is something about the cross.  The cross of Christ.  The power of God.  The love of Christ.  It shattered the plans of evil.  It looked like a bringer of death but it became a fountain of life.  It exacted a price while pouring out grace.  Blood shed.  Sin’s price paid.  My Savior died and life He gave.  “I will boast in nothing save the cross,” Paul said.  What do you boast in?