The Apostle Paul once wrote these words,

When I first came to you, dear brothers and sisters, I didn’t use lofty words and impressive wisdom to tell you God’s secret plan. For I decided that while I was with you I would forget everything except Jesus Christ, the one who was crucified. I Corinthians 2:1-2 (NLT) 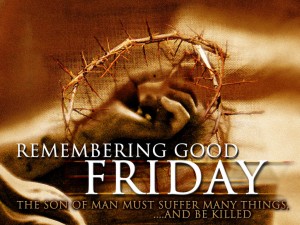 Some might say Christianity is too obsessed with Christ crucified.  Too focused on his death. Why can’t you focus on Jesus teaching and his good deeds? Why so much focus on his death?  Matthew, Mark, Luke and John saw the death of Jesus as a central theme of Jesus’ life and they focused nearly a third of their gospels on his last week. How many biographies have you read that focus so much on their subject’s death? Paul (the guy who wrote the majority of the NT outside of the gospels was no different. In his letter to the church in the city of Corinth, he wrote, “the Jews ask for a sign, the Greeks seek wisdom, but all I’m going to do is talk about Christ crucified…”

Ponder this for a moment. Take your heart back to Christ crucified. Betrayed by friends. Marked physically in a way that caused people to turn their heads away. Marked by nailprints and a cross. Marked for life…marked for death. Thousands of years before it happened, the prophet Isaiah was given a glimpse of Christ crucified. He wrote in Isaiah 53:

There was nothing beautiful or majestic about his appearance, nothing to attract us to him. He was despised and rejected — a man of sorrows, acquainted with bitterest grief. We turned out backs on him and looked the other way when he went by. He was despised and we did not care.  Yet it was our weaknesses he carried; it was our sorrows that weighed him down. And we thought his troubles were a punishment from God for his own sins! But he was wounded and crushed for our sins. He was beaten that we might have peace…whipped and we were healed!

We have sanitized the cross made it into a geometric shape that holds diamonds and hangs around our necks.  We’re surrounded by crosses,  silver and sanitized, but to really understand this great black Friday we celebrate, we must regain our vision of the cross as it was before sanitation.

The cross was a way to kill people. Crucifixion probably began with the Persians but was perfected by the Romans as a form of torture, designed to produce a slow death with maximal pain and suffering. It was one of the most humiliating and cruel forms of execution.  The word excruciating comes from the Latin word for crucifixion. C.S. Lewis points out that the crucifixion did not become common in art until all who’d seen a real one had died off.

From the outside it’s difficult to understand our movement’s initial embrace of the cross. Here is this struggling movement, persecuted, scattered, poor, doing anything they can to spread the good news of life, the good news of a Kingdom of God here and now. They are doing everything they can to invite people into community with them and the logo they choose to be recognized by is a symbol universally understood to represent pain, rejection, death, failure, and humiliation.

Who thought that was a good idea? Apparently Paul did. In Galatians 6:14, he wrote, “May I never boast except in the cross of our Lord Jesus Christ…” In essence what Paul was saying is, “We Celebrate Christ Crucified.” Part of me cringes when I put those three words together.

It is a mysterious wonder that they could be put together and still have meaning. Jesus in the garden…sweating drops of blood…groaning…scourging…beaten…black-eye, split lip…ridicule, scorn…A crown of thorns pushed down upon his head…(blood), spit is expelled upon his face. Listen as the crowd chooses the murderous Barabbas instead of Jesus.

His own cross falls upon his own shoulders to carry through town (with help from a man named Simon). They come to the garbage dump called Golgotha….shoved to the ground…arms stretched across the beams…a soldier presses his knee against his forearm, and a nail against his wrist. Lifted up for all the world to see. Then the sin comes. It descends upon him like a black cloud; all the physical suffering in the world could not compare to the inner pain, the disgust, despair, the experience that comes as the sins of the world, past, present, and future settle upon his soul.

The cross did not tame Jesus; it did not defeat Jesus. It elevated Jesus and let loose in the world the power of life. Something happened when Jesus died on the cross. Something deep down in the foundations of reality shifted. It isn’t just a story that shows the soft side of God. This is cosmic redemption — grace started working it’s way
backwards and forwards through time. Power was let loose and love was poured out and life was redeemed on that great black Friday.

We celebrate Christ crucified… and risen… but that comes later!