Last week at Calvary we gave out a booklet entitled, “Real Religion — 50 Stories of Hope.”  If you didn’t get one, you should pick one up.  In fact, give me an address and we will mail you one.  The term “real religion” 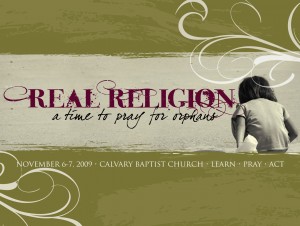 comes from James 1:27 where James says that real religion involves caring for orphans and widows and keeping yourself unpolluted by the world.  So the booklet is focused on orphans, one story for every day from now till Christmas.

They are convicting, thought-provoking, smile-causing, inspiring.  As an example here is Friday’s story:

“From July 11th to July 30th of this year, I traveled to Rwanda on a missions trip.  At a home for street children, I met a sister of one of the boys at a (orphanage) home.  Her name was Godance.  When I first met this girl, she spent most of her time joyfully singing songs.  The first English words I heard her speak, “I love you.” She spoken them in a sweet sing-song melody.  Later I learned that Godance was the daughter of a prostitute and that her mother had abandoned her.  She was adopted by a man that lived in the village and served the orphanage by caring for the home’s cattle.  Through this delightful three year old girl, God showed me the type of love that He has for His children.  Later I discovered that at one time this girl had been fearful of people, filled with worms, covered with dirt, and had bugs throughout her body and all over her.  It was amazing to see the transformation she had undergone because of the work of Christians showing their love for her.  This child revealed an innocent love to me that will forever remain a source of strength that I can draw from as I undergo trials and persecutions that will occur as I serve Christ… “

Grab a book, read a story, pray and act.