We are in the midst of a teaching series at Calvary called, “Press Pause for Life.” It’s all about keeping the Sabbath. If you want to check out one of the messages go to www.calvarysc.org/sermons. Meanwhile, we are continuing the conversation here with a bunch of posts. Today Johnny Pons is our guest blogger. Johnny is a Campus Pastor who serves at Calvary with all his heart! 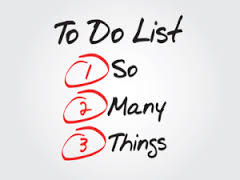 Hi, I’m Johnny and I’m a workaholic… Not always visible or even significant work, but more like busy hopping from one thing to the next. Kathy and I have served at Penn State as campus ministers for New Life Fellowship for 26 1/2 years. Kathy is primarily a physical therapist and I also served on the Calvary Harvest Fields staff for almost 2 years.

Weary, frazzled and frustrated would paint a pretty accurate picture of our lives at the end of 2015. We had spent our last 30+ years in ministry that we loved pouring ourselves into, but was no longer sustainable at our current pace. Kathy was the first to notice,  which is normal for us! We made the decision that we would stop breaking one of the most fundamental commands of the Bible, and chart a new course.

The first thing we did was do our homework. Our knowledge of the Sabbath was woefully inadequate. I had dabbled with it when I took a sabbatical in 2010, but obviously hadn’t learned much. We studied the Bible, we started reading books and watched a video series by Andy Stanley on Margin. We began praying A LOT for God to change our hearts. We discovered Mark 2:27, “The Sabbath was made for man, not man for the Sabbath,” was our doorway to more joy, not less.

Our first real challenge was finding the time in our schedules for a 24 hour period – together. Because of our work roles, coordinating the time was tricky. We settled in on Fridays from noon till noon Saturday, and for 2016 made that stick. Starting out was the easy part, but becoming comfortable with the routine was another challenge. In Dan Allender’s book, Sabbath, one of his quotes nailed me. He says, “The Sabbath is routinely rejected because it is one of our most profound tastes of grace.” I just had to get more accustomed to grace.

Another aspect of Sabbath that was both energizing and took some getting used to was preparing for the time. Ceasing and resting were more intuitive aspects of Sabbath-keeping, but feasting and embracing delight, took more creativity and forethought. After a few weeks those became some of our most anticipated aspects of Sabbath! Some weeks I delighted more than others, but the opportunity was always there.

I’ve said this out loud and actually believe it in my heart, that 2016 was the best year of my life, at least during these ministry years. The consistent rhythm of life for both Kathy and me was the antidote to the disorder and disappointment that our lives had created. Now that we have tasted what a Sabbath-keeping lifestyle looks and feels like, there’s no way we can go back, and have now become “Sabbath Evangelists.”

Our prayer is that in ceasing our striving, we learn to trust more deeply in Christ and that He is perfectly capable of running the world without us!