Jacob was about 4 and it was one of those difficult days. From Jake’s point of view, Mom just wasn’t living up to expectations.  Not only were they not communicating well, 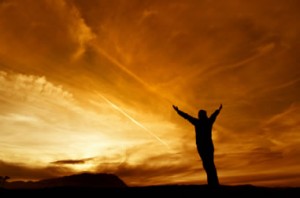 but more importantly Jacob just wasn’t getting what He wanted. He stopped, looked at Lynn and said, “Mom you’re fired!”

And we can laugh…because it’s a normal thing…it’s not such a big deal, the disappointments that a young child has because a parent has not come through in the way, we expected our Father to come through for us.

Then just when you believed in Him. He told you He was gonna die. Now you’re confused because you’re wondering if the one who said he was the way, the truth and the life — might be lying, or lost, or dying. And the prayers that were in your heart begin to die before they ever make it to your lips. You have joined the people who have been disappointed with the god they imagine God to be. People who have lost their way. You look at God and you wanna say, “Hey God you’re fired.”

But then Jesus begins to talk. He seems so sure of Himself. So confident. His words are so strong. So right. Words like…

Your heart starts to quicken, this is something fresh, hope starts to sing…softly, but it sings in your heart.  Then you hear…

In fact I’ll tell you something that is so true. Whoever believes in me, the works that I do, they will do also and even greater works than these will be done, because I am going to my Father.  And whatever you ask, in my name, I will do it, so that I can glorify the Father. If you ask anything in my name I will do it.

Does prayer work? Isn’t that the question?  And if it does, how?  If I believe it does work, why don’t I pray more?  If I don’t believe it works, why do I care?  This weekend at Calvary we are initiating 21 Days of Prayer, I wonder what might happen, what we might learn in 21 days?