Pray for the World 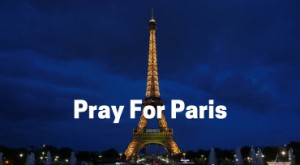 #PrayforParis has been trending on Twitter and Facebook. Lynn and I spent time Friday night watching the unfolding events in Paris. Such a tragedy. But perhaps it should be #PrayfortheWorld. This isn’t the first or even the worst terrorist attack in 2015. Ten other times in 2015 at least 100 people have died in a terrorist attack. Boko Haram and ISIL account for all those attacks but one. In April Al-Shabaab (Al-Queda offshoot) attacked mostly Christians at the Garissa University in Kenya killing 147. #PrayfortheWorld

Of course all of that pales when compared to the almost 5.5 million children under the age of 5 who have died in 2015 from preventable poverty conditions. About 1/2 of those deaths are from malnutrition and lack of clean water. #PrayfortheWorld

But do we…pray for the world? We should.

So don’t make the statement “I’ll pray for you” the equivalent of “In this moment I care at least a little about you.” Turn your care into prayer and pray for the world.