The Midas Touch — most of us understand that reference — sometimes known as the golden touch.  King Midas did a good deed for the god Dionysus (Greek mythology), who gave Midas his choice of reward. 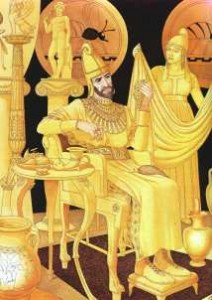 If you were given one wish, what would you request.  Let’s take it out of Greek mythology and bring it home.  You landed your company’s #1 client and your boss says, “Name your reward, if I can make it happen I will.”  What is your wish?  If make a great sacrifice for a friend or a spouse and they say, “Tell me what you want, if I can give it to you, I will.”  What do you request?  Your reward is limited only by their capacity.

What if the offer came from God?  Perhaps you made a great sacrifice or you were being called to a great mission, or more likely it’s just grace… and God says to you, “Name your reward.  One wish.  One choice.  One chance.  I will give you whatever you ask.”  Now the capacity of the giver is unlimited, so the range of reward is unimaginable.  What is  your wish?  One choice.

This has happened before in the Bible.  Solomon was given a choice.  He asked for wisdom instead of wealth or power.  The request pleased God.  When Jesus passed a blind beggar along the road — calling out for help — Jesus asked him, “What do you want me to do for you?”  If  you had one choice, unlimited reward, what would you request?

Imagine that you are even wiser than Solomon and completely full of trust in God and when God asked you to make your choice, you responded, “God I would like you to choose my reward.”  If God could give you one thing and one thing alone…  If God had it in his heart to give you the greatest reward He could imagine… If God had one choice…  What would God give you?

I think He would give you… God.  Himself.  Jesus.  His Spirit.  What greater gift could He give you than Himself?  Perhaps that’s why we rarely ask Him to choose…  God forgive us for missing the reality that you are the greatest gift.  May we seek you with all our hearts.