Never Have Lunch with Greedy Christians

I ran across this story in the life of the early church. 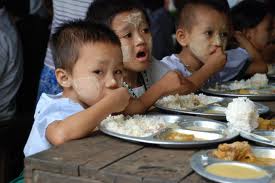 It’s in the book of Corinthians. Paul is challenging the church. Actually it’s more of a rebuke. Apparently there was a man who was sleeping with his father’s wife…and for some reason the church was embracing this situation. Almost celebrating it.

Paul writes,
How terrible that you should boast about your spirituality and yet you let this sort of thing go on. Don’t you realize that if even one person is allowed to go on sinning, soon all will be affected? When I wrote to you before I told you not to associate with people who indulge in sexual sin…but I wasn’t talking about unbelievers, you would have to leave the world to do that. What I meant was that you are not to associate with anyone who claims to be a Christian yet indulges in sexual sin… or is greedy.

Definition of greed: The word Paul uses is the Greek word pleonexia means an unquenchable desire for more. Sometimes in the Bible it’s translated as covetousness, because it involves a willingness to get more even at the expense of others.

Here’s a definition. Greed is wanting more for myself, even to the detriment of others.

Two boys began to argue over who would get the first pancake. Their mother saw the opportunity for a moral lesson. She said, ‘If Jesus were sitting here he would say, ‘Let my brother have the first pancake. I can wait.’ Kevin turned to his younger brother and said, ‘Okay, Ryan, you be Jesus.'” THAT’S GREED.

Do you think we might be willing to admit that greed might perhaps, possibly, be a sin that muddies up our hearts?  Listen.  I’m not here to tell you, that you’re greedy. That’s between you and God.  All I know is that Lynn and I have never in any year given less than 10% to charity. Usually it’s closer to 15%. We do not live extravagantly, nor do we live like misers. We enjoy going out to eat, but we also support four orphans. I loved going to Hawaii as a family but also loved going to Myanmar with my family to work in an orphanage. All in all, maybe kind of typical Christians, but more than once, my heart has been pierced by God saying…

Dan you have a problem with greed.

How about you?   Wanna have lunch?