I came home yesterday to find a CNN twitter update waiting for me. 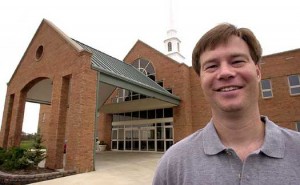 Fred Winters had been killed.  I didn’t know Fred Winters, but there were enough similarities between the two of us that it made me stop for a moment to ponder life.  Fred Winters was…

The main difference is that last week, Fred Winters worked on the last sermon he will ever give.  It was on a favorite topic of his, the joy of giving.  Last Sunday, while he was preaching during the first service at First Baptist Church of Maryville, IL, a man walked up the center aisle and shot him.  The first bullet hit his Bible, there would be three more shots, one of them straight to the heart.  The congregation was caught off guard, in fact many people thought that this was just part of a sermon illustration (Pastor Winters would often use unusual illustrations and dramas during worship).  It was all over in seconds. Pastor Winters was pronounced dead at the local hospital minutes later.

Most of the news briefs I saw on tv yesterday focused on “church security,” but the reality is that none of us are secure from death.  I think what hit me most is simply, the last sermon part.  If last weekend would’ve been my last sermon.  It would’ve been preached to possibly the smallest audience I’ve preached to in a number of years — my first spring break weekend to preach in a long time!  It would’ve included a children’s sermon — for maybe the first time in 15 years?  It would’ve been on Psalm 34 with a focus on the goodness of God.  Not a bad way to go out, but I’m not sure if it’s what I would’ve chosen if I knew it was my last sermon.

Paul challenges us in the book of Ephesians to redeem the time, to make the most of every opportunity.  Fred Winters is a reminder of that challenge.  Pray for his wife and his two daughters.  Pray for his church.  Hard stuff, but God can redeem hard stuff.