I’m not really a hugger.  Everyone knows that.  Except my wife and children, they believe that I’m a hugger.  I actually enjoy hugging Lynn, Sarah, Katy, Jake and Josh. 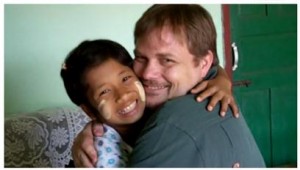 Some people like to use my hugger-less-ness against me — in fun of course — for example Harold and Kevin won’t let me leave their presence without a hug.  Both Harold McKenzie (a local pastor) and Kevin Lewis (from Calvary) are taller than me, so a hug with them is extra uncomfortable as my check rests against their stomachs.  It’s not like I can’t hug, I do a fairly decent one armed hug, and occasionally if the occasion warrants I can do a bear hug, but the statement, “I’m not really a hugger.” has some merit when spoken by me.

So why does hugging and Dan find themselves slightly uncomfortable around each other?  I don’t know.  Maybe it’s because I grew up on a farm and most people seemed to carry a little manure somewhere on their bodies.  Maybe it’s my Norwegian/German heritage, neither one of those countries have forged a “hugs forever” heritage.  Maybe it’s a personal space thing, or maybe it seems like a hug costs more than it’s worth.

All I know is that when I go to the other side of the world and hang out with a bunch of fatherless kids — I become a bit more of a hugger.  No let’s be honest I become a hugger.  Not so much with the adults, but about the only time I’m not hugging is when I’m not with the kids.  I’m not completely sure why, but something in the kids of the Burmese orphanages just draws me in and opens me up.  It’s like my arms go on auto-drive.

So when Lynn, Sarah, and Katy made me promise to give Rhonda, Susanna, and Elizabeth, a hug from them — or else — I acted like it was a big deal.  But I was actually looking forward to it, and I did it.  Big hugs.  Bear hugs with a squeeze.  It was like they were part of my family, and it’s easier for me to hug family.  When I read in the book of James that God is a father to the fatherless, I get this picture of God the Father, coming up and giving his kids a great big hug.

That’s what a good father does.  He hugs.  But just so you know, Harold and Kevin.  I ain’t your dad!