God is moving in Buddhist hearts. The Buddhist religion shapes a significantly different worldview than the Christian faith. 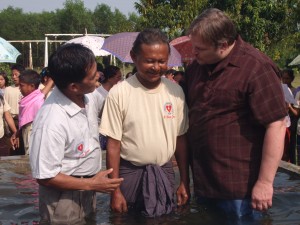 From a Buddhist worldview the goal is to empty yourself. Jesus came to fill us; fill us until we overflow with the rivers of living water, overflow with joy, overflow with His Spirit. The ultimate goal of Buddhism is nothingness, whereas Christ is preparing a whole new heaven and earth.

Imagine the courage and conviction it requires to move out of the 95% majority into the 5% minority.

Friday was the last day of the Bible Conference in Myanmar. God put it on the leader’s hearts to invite more Buddhists this year, more than usual. In each of the previous Bible Conferences in which I have participated there have always been a handful of Buddhists in attendance. This year there were more.

Joseph had picked “Jesus is Eternal Life” as the theme. At the beginning of the conference Joseph told me that he was hopeful, that God would work and maybe by the end of the conference three or four Buddhists would become followers of Jesus and be baptized. In the end God worked a bit more than we were hoping. Twelve Buddhists become followers of Jesus and were baptized.

Then reality set in – a good hard reality – as a husband came to ask prayer for his wife and daughter. They attended the conference. He became a Jesus-follower. They did not. They were confused. We prayed for the three of them, that God would open their eyes. Then another father came and ask us for prayer. Three years ago, a strong Buddhist, he accepted Jesus at one of our Bible Conferences. He went home and shared Jesus with his family and his daughter accepted Jesus as her Lord. Now she wants to be baptized but the leaders of her village have told her that if she gets baptized in the name of Jesus, they will kill her.

The Burmese Buddhists are one of the world’s largest unreached people groups, but God – as always – has placed his people in strategic places to share the gospel with them. The people of the Chin State – those we are working with are Chin – are some of those strategic people. Pray for them as God leads them on his mission.