Looks can be deceiving.  My grandfather John Nold got polio when he was young.  It left him crippled. 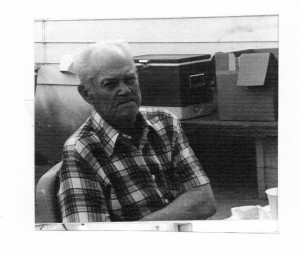 But one thing he did even better than catch runaway grandkids with a cane, he caught my imagination with his stories.  I remember going out to his trailer before school.  I would sit with him and watch for the bus — I was about six or seven — and he would tell me stories.  Stories about the road, following the harvest, riding the rails, and campfire meals with hobos.  As a young boy there was not much better than Grandpa’s stories.

Through those stories my Grandpa left me a love for the journey and a passion for adventure.  I dreamed for hours about Huck Fin and his river raft.  My favorite show was and still is Star Trek and “it’s on going mission.” This wanderlust has not always confined itself to the safer roads of my imagination.  While in college, I hitchhiked home once.  I spent most of the time in a light rain on the back of a Harley Davidson with a biker who stopped about every 10 miles for a beer…now that was a trip…it increased my prayer life exponentially.

As I grew older and a little more perceptive, I came to realize my grandpa’s life was not quite so glamorous as my childhood imagination painted it. Life on the road was really the journey of an alcoholic abandoning his family, leaving home for long periods of time — a combination of running from, and in some ways desperately seeking home.  Gilbert Bilzekian writes, “The silent churning at the core of our being is the tormenting need to know and be known, to understand and be understood,…to belong unconditionally and forever without the fear of loss, betrayal or rejection.”

What we are seeking is love unbounded.  Love without limits.  We want to know that we are not outside the boundaries of somebodies heart.  Can someone out there love me without limits?  But in fact, it’s even more than that.  It’s good to know that I can be real with you and not face rejection.  But it’s not enough, I want to be loved in a way that changes me.  Aren’t we all seeking a love that makes us whole?

Near the end of his life, my grandpa found that love.  He opened up his arms to Jesus.  His marriage was restored and his story was redeemed.  He found the home that he was seeking.  How about you?  Where are you questing for life?  Where is your home?  That place where you are loved without limits?  This week we are starting a new teaching series at Calvary…  LIfe Without Walls. Hope you join us online or in person.  There is a life that God designed for us that is an overflowing kind of life…it’s a life without walls.