Sorry I couldn’t resist.  So Joe the Plumber just received his allotment of fame.  I guess instead of soccer moms, we now have Joe Plumbers.   I hear he’s not telling whose name he’s going to check on the ballot.  But I was just thinking, since both of our presidential candidates directly addressed Joe last night, what if we just ask Joe to choose?  We could cut out all the ads and use each candidate’s campaign war-chests to bail something out.  If it works well, then four years from now we can pick another everyman to choose for us.  Perhaps next time it could be Sue the Teacher, or John the Garbage- 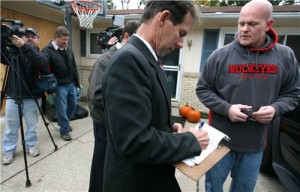 Pick-Up guy, or perhaps even Paul the Pastor — or maybe not.  :)  Instead of debates that everyone has to watch, each candidate could just have dinner with the randomly chosen, everyvoter.

I know they already played this all out in a movie.  But I’m just thinking it might have merits.  I mean where better to discuss this year’s political fervor than over a broken toilet?  So how about it?  Let Joe pick?

Well before you decide, let me make sure you have the full story.  His first name ain’t Joe, it’s Samuel.  He is a plumber, but he doesn’t have a license.  He owes $1200 in back taxes…AND….notice the sweatshirt?  He’s a buckeye.  Oh well, looks like we’ll have to have the election after all!  :)

Here is the only thing I’ve written in this post that matters — No matter who becomes our president…I’m glad that Jesus is still King.