I’m Not a Hugger

I would say that I don’t come from a family of huggers — but that’s not entirely true.  My mom and my sister are pretty decent huggers, but us guys not so much — at least not each other.  I’m guessing they probably hug their wives and their kids.  (Each of them only has one wife, it’s plural wives because it’s plural brothers.  Just wanted to make that clear.)  The first time I remember getting hugged by a guy who was not an immediate family member was a man named Doc Dalton.  (Just to make another thing clear — I’m not counting sports hugs, like touchdown hugs, winning shot of the basketball game hugs, or huddles, or wrestling takedowns.  Those don’t count.)  Anyway the first time he hugged me, it was kind of confusing, there wasn’t a football game within miles.  To be honest I grew to respect and appreciate Doc.  He became a good friend, and after four years of college, I was a little more comfortable with hugs — but still not a hugger.

Now, understand this.  I love to hug my wife and my kids.  I will not run away if you try to hug me.  And I will on occasion even initiate a hug if it you are celebrating a special occasion or going through a hard time.  But if a handshake or a clasp on the shoulder will do I’m okay with that.

So why a post on hugging?  I just ran across this article related to the swine flu. 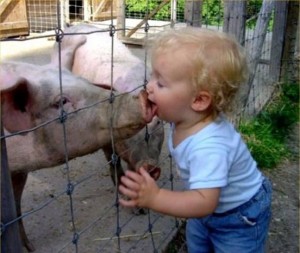 Swine Flu:  No Touching at Church. If you don’t have time to read it, it’s about a church of 25,000 in Charlotte NC that has declared church a no-touching zone during the swine flu season.  I don’t know –

– I’m not a hugger and I know that there is a small chance the swine flu could turn into a pandemic — but I think declaring church a no-touch zone is a bit too risk aversive for a movement that is called by Jesus to storm the gates of hell and give our lives for a friend.