My name is Dan Nold and I’m a recovering Christian.  That’s how we ended this weekend’s talk at Calvary. 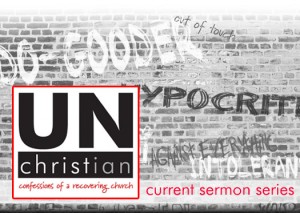 It was apology #1 in our UnChristian series — sorry for our hypocrisy.  I felt a little odd saying that statement, “I’m a recovering Christian.”  It puts Christianity on par with AA — Christians Anonymous.  But in so many ways in the eyes of the next generation the word Christianity is on par with alcoholism.  We can say, That ain’t fair.”  But fair or not, our press isn’t too good at the moment.

And let’s be honest, there are reasons why our press isn’t good — take hypocrisy for example.

Do you know where we were different?  We flip people off less often and we were less likely to have bought a lottery ticket in the last 30 days.

When I read that I couldn’t decide whether to laugh or cry.  No wonder I get weird looks from Christians when I show them my lottery ticket.  I didn’t realize it was one of the two essential qualities that define a Christian.  I mean isn’t that what we teach our kids or tell our friends.  If you want to be a Christian, limit your lottery tickets and put away your middle finger.

Is it any wonder we are charged with hypocrisy?  Is this what Jesus wanted Christians to be marked by?    NO.  He said that we would be known as his followers by the quality of your love, by the size of your heart, by the depth of your passion for God and your capacity to love your neighbor.

So this week, I’ll be holding my rag (if you want to understand the rag reference, you’ll have to listen to the talk

1. Hypocrisy
) and saying to myself,  My name is Dan Nold and I’m a recovering Christian… but my deep desire is that I would be a heart-shaped, fully formed, passionately authentic follower of Jesus Christ. But it’s a process…and along the way…  we all have rags.
Logging In...