Halloween, Politics and the Church

I’m just spending a little time trying to ponder the differences between Halloween and a political campaign…can’t think of many.  Everyone has their hands out; most people are wearing masks; 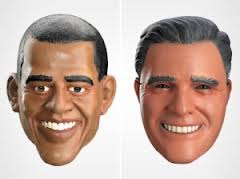 and if it weren’t so funny, it would be kind of scary!  :)  But beyond that let me take a moment and hit three other common intersections between Halloween, politics and the church.

SAYING THANK YOU. With each of my children, whenever they have gone into our neighborhood trick-or-treating.  My number one instruction has always been — Never forget to say thank you.  Whenever someone gives you candy, always say thank you. Too be honest, I think a political season should always cause the church to pause for a moment and say thank you to God.  We live in a nation where ideas are freely expressed and leaders are freely selected.  In many countries around the world, elections are a sham and attempted transitions of power can bring unimaginable levels of suffering to the people — places like Myanmar.  As annoyed as I get with negative adds filled with “mistakes,” we should say thank you to God for the place we live.

THE CHURCH DIVIDED. Some Christians think Halloween is a harmless kid’s activity.  Some think it is the devil’s holiday.  And I’ve seen some Christians divide over their views on Halloween.  Some think Jesus is a republican.  Some think Jesus is a democrat.  (But both know that He’s not a libertarian.)  :)  And I’ve seen Christians divide over political views.  All I can say is…stop it.  Just stop it.  If you vote, vote as you feel God is leading you to vote and trust that other followers of Jesus are doing the same.  When Halloween/Election is over, they will know that we are Christians…not by our costumes or our votes, but by the love we have for each other.

THE BIGGEST SCARE:  One last common intersection between Halloween and a presidential campaign, the money. We will spend over $2.5 billion on Halloween costumes this year.  The money spent on the presidential campaign is also nearing $2.5 billion.  This year close to 9 million children under the age of 5 will die from preventable poverty conditions around the world; things like dirty water, and no food.  EmptyTomb.org suggests that about $5 billion a year would prevent those deaths.  Give up costumes, pick the President out of a hat…and save 9 million potential artists, story-tellers, inventors, teachers, farmers, fathers, mothers, doctors, nurses, firemen, carpenters, leaders, accountants, engineers, janitors, and friends.

One of the things that I love about Calvary is that every year (around Christmas) we are challenged to give 1% of our annual income to serve kids in need around the world.  I’m not saying you shouldn’t vote or buy a costume, just reminding us that in some people’s minds, there might be something more important than both.