It makes sense that we spend some time on pondering the attitude of gratitude this week.  (If you are looking for “Gratitude #1” read the previous post Monday Morning Quarterback.) Here are a couple of stories for those of us who are thinking, I can’t be thankful because I have nothing good in my life.

The year was 1636, it was the worst of times in Europe and the people in Pastor Rinckart’s 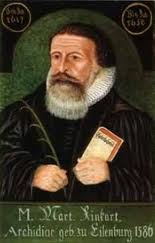 parish experienced the worst of the worst. They were in the midst of the “30 Years War”, and the enemy had already invaded their town three times, destroying almost everything of value.   Then the Black Plague arrived.  One pastor fled the plague and the people.  Rinckart buried two more on the same day, leaving him as the sole pastor in the region.  Pastor Rinckart buried between 4500-5000 people in one year.  That’s an average of 13-14 funerals a day, one day he had 50.

How would we handle such circumstances?  Surely he struggled with having an attitude of gratitude?  Martin Rinckart sought God’s strength in deep soul-searching prayer and in that dark night of the soul he sat down and penned this table prayer for his children:

Now thank we all our God with heart and hands and voices.  Who wondrous things hath done, in whom his world rejoices.  Who from our mother’s arms hath led us on our way with countless gifts of love and still is ours today.

Isn’t that incredible? Almost unbelievable…an attitude of gratitude in the midst of tragedy. The living did not warrant thanks giving…but still the gratitude came.

She has every reason to be bitter.

For years an unrecognized talent sprang from her lips. Prestigious opera circles closed their doors, critics ignored her, she was repeatedly rejected for parts for which she easily qualified. Only after overwhelming success in Europe did she find any acceptance in her own country.  In her personal life she has faced even more. The mother of two handicapped children, one severely retarded. Years ago, to escape the New York City rat race, she bought a home on Martha’s Vineyard.  It burned to the ground days before she was to move in.

Her life has been full of living that did not warrant thanks giving.

But in spite of her troubles she’s gained the nickname Bubbles — Beverly Sills.  After interviewing her Mike Wallace said, “She’s one of the most impressive – if not the most impressive – ladies I’ve ever interviewed.” Why? “I choose to be cheerful,” she says. “Years ago, I knew I had little or no choice about success, circumstances, or even happiness, but I knew I could choose to be cheerful.”

Your living might not seem like it warrants thanks giving at the moment.  If so, you are even greater need of the discipline of gratitude.  Get a piece of paper and a pen.  Sit down and make a list, at least 20 specific things for which you are thankful.  Write it down and than turn them into a prayer.  Tell God thank you for each of them.  Choose gratitude.