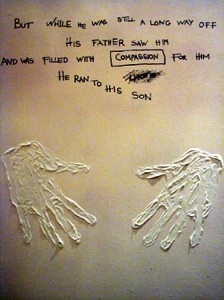 been thinking a lot about the older brother.  When the prodigal son came back home, the father ran to meet him, embraced him, welcomed him, and called for a celebration party.  That’s grace in action.

Here’s the deal when that kind of grace flows, somebody is bound to be uncomfortable, perhaps even offended.  In this case it’s the older brother… read this and picture the look on his face and the texture of his heart…

So they began to celebrate. 25“Meanwhile, the older son was in the field. When he came near the house, he heard music and dancing. 26So he called one of the servants and asked him what was going on. 27‘Your brother has come,’ he replied, ‘and your father has killed the fattened calf because he has him back safe and sound.’ 28“The older brother became angry and refused to go in. So his father went out and pleaded with him. 29But he answered his father, ‘Look! All these years I’ve been slaving for you and never disobeyed your orders. Yet you never gave me even a young goat so I could celebrate with my friends. 30But when this son of yours who has squandered your property with prostitutes comes home, you kill the fattened calf for him!’

So I have no wondrous grace story to share with you, just a question.  Where are you practicing older brother living?  See..

I will occasionally hear the questions like, “Is Calvary soft on sin?  Do we sugarcoat the truth so that it doesn’t offend prodigals away from home?”  I hate sin.  I hate what it does to people.  I hate the sin that is easily recognized as the bad stuff we do, and even more I hate the sin that is easily ignored as the good stuff we fail to do.  I do not believe we sugarcoat the truth — but I do believe in the truth of grace.  And I do believe that the sins of the older brother are as damaging to one’s soul as the sins of the prodigal son.

I am okay if we offend older brothers when we offer extravagant grace to prodigal sons.  I want to keep offending the older brother in me, till he becomes more like the gracious father.

You understand, it is neither the prodigal son, nor the obedient brother who are the heroes of this story.  It is the gracious father.