Grace #6: Life in the Far Country

So back to this story of prodigal grace in Luke 15 and the question, “Which character do you identify with?”  Jesus is telling the story and he says… 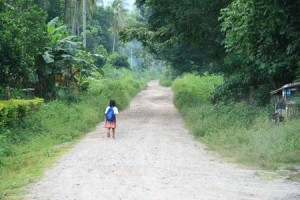 There was a man who had two sons.  And the younger of them said to his father, ‘Father, give me the share of property that is coming to me.’ And he divided his property between them.  Not many days later, the younger son gathered all he had and took a journey into a far country, and there he squandered his property in reckless living.   And when he had spent everything, a severe famine arose in that country, and he began to be in need.  So he went and hired himself out to one of the citizens of that country, who sent him into his fields to feed pigs.  And he was longing to be fed with the pods that the pigs ate, and no one gave him anything.

“Where do you want to live?” the father asks us.  He doesn’t force us.  In fact in some ways you could say that he makes it possible for us to choose life in the “far country.” Are you living life in the far country?  When I’m in a far country, God is not often on my mind.  I don’t want to be reminded that my actions might be hurting his heart and building walls around mine.   When I’m in a far country, I find that more and more my focus is on my self.  I’m not a very good friend because my primary passion is my personal pleasure.  Sin is increasingly attractive… like gossip if it makes someone else like me; or sex if it makes me like myself.  In the far country, reckless extravagance is my hope.  Perhaps more stuff will fill the holes in my heart.  But it doesn’t.

And do you realize that it was not just the prodigal who was living in a far country?  The elder brother was just as far from his father as his prodigal brother.  Sure the older brother remained in his father’s house, but his heart had left home long ago.  Proximity does not equal intimacy.  You can go to church all your life and never allow God to be your father.  When I’m the older brother living in the far country, life is full of comparisons and judgments.  I compare what I’m doing to what others are doing.  I compare morality and achievements.  Life in the far country is about earning love.

And you know what?  It’s easy for the church to take advantage of people living in the older-brother mold.  They are good workers.  They will stay in the field all day long trying to earn love.  But here’s the problem, trying to earn love leads you on a journey to a far country.

Both prodigal sons and older brothers live in the far country.  When it comes to grace, the one has come to realize how desperately he needs it, the other is offended when someone else receives it.