As I’ve been doing this series of blog-posts on grace — my mind has been drawn to Jesus story of prodigal grace.   It might be his most well-known story.  Charles Dickens, the 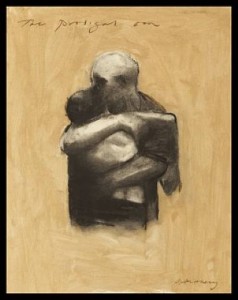 great English author, called it  the greatest story ever told.   Often known as The Story of the Prodigal Son it captures the essence of the Christian faith and sums up the core message of the Bible.  It is a story about walls we build and the life we can find beyond them.  It is a story of scandalous grace and unconditional love.

If you want to be embraced by the full wonder of the story you have to jump in.  Begin by placing yourself in the moment when Jesus is first telling the story.  In Luke 15:1 it says that all the tax-collectors and sinners kept coming to Jesus and Jesus was hanging out with them.  Now let me bring that picture into better focus for us today.   Tax-collectors in those days were rich slime.  They made their money by cheating and oppressing their neighbors.  “Sinners” — well that was anyone that religious people looked down on.

So picture this…Jesus is hanging out at the Rathskeller or a local frat house or the Phyrst.  He’s just playing darts or pool.  Eating pizza and wings, talking and laughing because he likes to be with people.  And no matter where he is, people want to be close to him.  Whether they are partiers, or girls who’ve embraced “the walk of shame,” men who have crossed every ethical line to cash in, or people who carry heart wounds and doubt there even is a God.  They all want to be close to Jesus.

Can I tell you what they have in common?  They all have walls around their hearts.   No matter where he is, people who are looking for life beyond the walls, gather around Jesus.  There’s just something about him.  Something kind and passionate; something in his eyes and his words that draws them.  Everywhere he goes, they come.

So Jesus is leaving the Rathskeller and the religious people — in those days they were called Pharisees and scribes — in the story Jesus will call them, “the older brother.”  They were hanging around outside the door, because there was no way they would go in.  When Jesus comes out, they grab him, they are upset, hey thought he was one of them, and they said, ‘Jesus, why are you hanging out with people like this.   By this time there is a crowd outside, it’s a mixed crowd.  Religious people and regular people.  Jesus says, “Gather around.  I want to tell you all a story.”

My Amazing Grace always be our song!