I think sometimes, when it comes to grace, perhaps our range of vision and understanding is simply to narrow.  We typically stop at forgiveness.  Grace = forgiveness = a second chance.  But grace actually goes well beyond forgiveness.  Paul says that it is by grace that we are saved — and “saved” actually goes well beyond, “I made it into heaven.”  Being saved is the process of becoming more and more like Jesus.  So grace goes beyond forgiveness and saved goes beyond hell-insurance.

In other words, God not only forgives us by grace, he redeems us and transforms us by grace. In Malachi 3, it is stated this way, 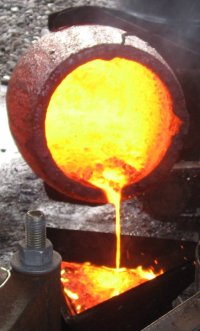 Look! I am sending my messenger, and he will prepare the way before me. Then the Lord you are seeking will suddenly come to his Temple. The messenger of the covenant, whom you look for so eagerly, is surely coming,” says the LORD Almighty. “But who will be able to endure it when he comes? Who will be able to stand and face him when he appears? For he will be like a blazing fire that refines metal… He will sit and judge like a refiner of silver, watching closely as the dross is burned away.

When God comes close, do not expect it to be an entirely comfortable experience.  You may be unable to stand.  It may burn.  He is a refiner’s fire.  Burning away the garbage in our hearts. It’s not optional so, we have to decide, when God comes close will I let the fire burn?

A lady once went to watch a silversmith.  She actually wanted to have a better understanding of what it means that God is like a blazing fire, a refiner of silver.  The silversmith held a piece of silver over the fire and let it heat up. He explained that in refining silver, one needed to hold the silver in the middle of the fire where the flames were hottest as to burn away all the impurities.  Did it ever feel to you like you were being held in the fire?  Not just the edges, but the very hottest spot?  Like God just wouldn’t let you go no matter how much it burned?

The silversmith went on to describe how the refining of silver took his full attention.  He had to sit right there holding the silver…watching it the entire time it was in the fire… left even a moment too long in the flames it would be destroyed.  At just the right moment he would bring the silver out of the fire…the dross… the impurities would rise to the top and he would skim it out.  Over and over again…he would do this till the silver was fully refined.

The woman was silent for a moment. Then she asked the silver smith, how do you know when the silver is fully refined? He smiled and answered, “Oh, that’s easy –when I
look in the silver and see the reflection of my face.  I know it’s fully refined.”

God will not stop refining us till he sees his reflection in our hearts.  This is his grace.

May Amazing Grace ever be our song.