So last week, my daughter came home — was supposed to come home. She is going to 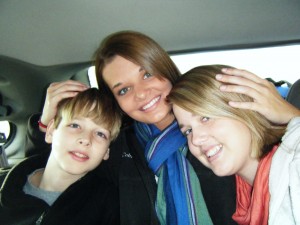 Bethel University in Minnesota. She was finished with her finals last Thursday, drove to my folks for a day or two and was supposed to fly home Saturday — routing, Sioux Falls, SD to State College through Chicago and Washington D.C. — yep the same Saturday that that same D.C. got socked with snow.

So first the D.C. – State College flight was canceled. So after being on hold for about 90 minutes we got her a flight from Chicago to Harrisburg.  But morning came and the flight from Chicago to Harrisburg was canceled and we were being told that she couldn’t get home till MONDAY. This wasn’t good as we had a passport agency appointment in Philly on MONDAY.

— went on hold for 90 minutes and got her a flight from Sioux Falls to Harrisburg on Sunday, unfortunately it was coming in late on Sunday night which meant Katy would miss a big friendship opp with friends she hadn’t seen for many months. So she was slightly disappointed — read “falling apart” — about that. So we spent about 5 hours on hold trying to get her on standby for an earlier Sunday flight. After 5 hours of hearing — Thank you for your patience. Your call is important to us. Please wait for the next available agent. We gave up and my siblings got her on standby by going to the Sioux Falls airport.

Things were looking up. She made her first standby flight — Sioux Falls to Chicago. Unfortunately on her standby flight from Chicago to Harrisburg, she was number 37 of 44 on the standby list. So some more “slight disappointment” type stuff to work through. Then to make matters worse her appointed flight got delayed by 2.5 hours…and of course they did it 20 minutes at a time, drawing it out long enough so that we would wonder if it was just going to get canceled. Which gave us about 150 more minutes of “slight disappointment” for Katy. Katy finally got home about 11:30pm on Sunday night.

So what’s the point?

As a Father, the whole time, I just wanted to fix it. Make it right. If I thot it would have been quicker I probably would have driven to Chicago to get her. I didn’t want her to be disappointed. I wanted her to have what her heart desired. Then God put this thought on my mind, “What if there is something here more important than her comfort? In fact what if this isn’t about her at all. What if want to do something through her for someone else?” All that gave me a cool, teachable moment with Katy.

But then the next thought came. Wow. I couldn’t make it as God. I don’t think my love is often enough, strong enough to refrain from fixing stuff for my kids — so that they can be used to serve others, or so that they can grow in character and perseverance.

God loves me enough to let me suffer, if it will help me grow, or if I can find the joy that comes from serving someone else. In fact that’s what Christmas is all about. God let Jesus suffer…so that Jesus could serve us.