The eyes of the world are on Happy Valley.  In some ways that’s not an uncommon experience; 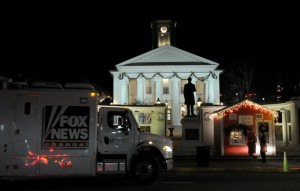 with half a million alumni around in the U.S. and thousands more around the world; with a football team that draws 100,000 fans a game, we have felt the eyes of the world…at least on occasion.

In the last few weeks, the eyes on us have been looking for other reasons.  From the dismissal of a coach and a president, to riots and candlelight vigils; from the football field to a courtroom, the eyes have been on us.

I keep wondering what they see.

A week ago, I received a letter from a PSU/Calvary alumnus.  She was talking about other eyes on us and wrote these words,

I attended Calvary while I was a Penn State undergraduate and graduate student… Now I am living and working in the Lehigh Valley.  When I heard about the Sandusky scandal, I felt like my heart had been ripped in half.  I cried for and grieved over the victims.  I felt like I had been betrayed.  I was angry at everything that Penn State and State College stood for.  But as the events continued to unfold, my heart began to soften.  I saw the vigil that the students held.  I heard the ESPN reporters gush over the efforts of the students to raise money for sexual abuse victims, and I heard about the great hospitality they extended towards the Nebraska fans.  In short, what I saw, was Jesus in the midst of chaos.  The reporters haven’t given it a name yet, but they see it and are talking about it.  There is a mysterious peace and an overwhelming love that is exuding from State College, and its name is Jesus.

Even now, weeks later, people are still talking about the scandal as if it was a terrorist attack.  Everywhere I go—work, shopping, church, radio, television—it’s there, and people are trying to figure out how to deal with it. They are looking to State College for answers, and I see the Christians of State College rising to answer them. Your love and compassion are spreading even to the Lehigh Valley, and people don’t understand it.  They are amazed at your ability to forgive those involved, and your abundant generosity towards the victims.  It is a constant topic of discussion and, consequently, I have had many opportunities to tell people about Jesus’ love.

I am no longer ashamed or angry to be associated with Penn State, because the Christians there are redeeming it.  The Church of State College has shown the world how Christians should respond to evil, and they have given Christians everywhere the chance to redeem Christianity’s reputation.  Even today in my church, the pastor encouraged the congregation to ride the wave of love and compassion that State College has started, because this is how nationwide revivals begin.  This is our chance to change the world.

Pastor Dan, I have heard you call for revival from the pulpit.  I have heard you beg your congregation to live in such a way that the world looks to us for answers, and I have watched you prepare them for such a time as this.  When the time came, and when the world was watching, they were ready.  I am proud to say that I belong to the Christians of State College, and I am so encouraged…  Tell the Church to keep pressing on, because the nation continues to watch, and listen to our Father saying, “Well done, good and faithful servants.”

Your Sister in Christ,

Eyes on us.  As I’ve been pondering that thought, God put these words on my heart.  When the world’s eyes are on you, if what they see is Jesus, a movement of God will grow.  If all they can see is you, God will move elsewhere.  So that’s my prayer.

God when their eyes are on us, let them see Jesus.