Do You Love His Name?

It’s Christmas — Christ-Day.  You may or may not realize this but Christ is not Jesus last name.  Christ was a word in Jesus day which referred to the ONE, the anointed one, the legendary one, the one of prophecy, the ONE King.  Sometimes we forget the incredible honor that we have on this side of Christmas.  We know the name of the Christ.  His name is Jesus.  We know the name.

Let me ask you, do you love his name?  You know some people will tatoo the name of the person they love on their arm… like “MOM.”  What do you do if you put “JULIE” but then end up marrying “AMY?” 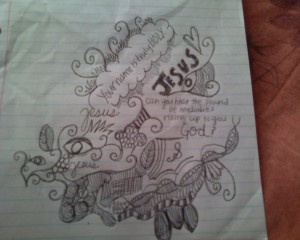 When you were young — and in love — you might have doodled some guy’ss name all over your notebooks.  When my daughters were in High Schol, I would try to look through their notebooks to see if there were any doodled names — so  I could keep my eye out for that guy!

Did  you ever doodle the name of Jesus in your notebook?

But then as you got older you found that loving someone might mean defending their name.  Maybe you had a brother or sister that you thot you hated, until you heard someone use their name in vain…saying something bad about them, and then the stuff inside your heart just overflowed…and you wanted to do battle for their name!

Did you ever go to battle for Jesus’ name?  Did you ever look up and gently ask someone to stop using Jesus name as a swear word?

And then one day you fell in love…this was it, the person you were going to marry… and we learned when we fell in love that we might love some one so much that we would make their name our own name.    Or maybe you went out and found — like so many families at Calvary — a child that you would love so much that you would adopt them and bring them home, and give them your name.

If you are a follower of Jesus, you’ve been given his name.  Do you love his name?

Is that all we talk about? Not in some push-my-religion-on-others kind of way, but have you have found yourself in a season when you just couldn’t stop talking about Jesus?  Seems like that should occur even more at Christmas? Do I love the name of Jesus?

This is the one Christmas message, “The Christ has come and his name is Jesus.” Paul was a man who understood the one message,he said things like,

I decided not to know anything among you except Jesus Christ and Him crucified.  (I Corinthians 2:2)
What is more, I consider everything a loss compared to the surpassing greatness of knowing Christ Jesus my Lord, for whose sake I have lost all things. I consider them rubbish, that I may gain Christ…  (Philippians 3:8-9)
I am afraid that somehow you might be led astray from the simplicity and purity of devotion to Christ.  (2 Corinthians 11:3)

This Christmas season, take some time to evaluate the state of  your devotion to Christ.  Maybe some things need to be cut out of your life.  Maybe some habits need to be awaited.  We cannot — with integrity — say that we want to get this Christmas right, and then spend all of our time pondering, everything but Christ.

My prayer is that we will have a Christ-saturated season.