One day a man named Moses — He really lived, not just a character in a Dreamworks animated movie (Prince of Egypt) — walked past a bush.  Most likely he had passed by the same bush a hundred times 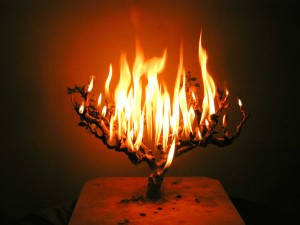 before.  Just a bush, everyone in his neighborhood had a bush.  Some people had three or four.  But this moment was different.  This time the bush was on fire with the presence of God.  It was on fire, but it wasn’t burning up.  Moses looked at the bush and he said, “I must turn aside and look at this great sight, and see why the bush is not burned up.”  Moses exercised a little divine curiosity.  He stopped to look.  He paid attention, and he heard the voice of God.

Do you see how everything hinged upon his willingness to exercise his curiosity?  Everything hinged upon his willingness to interrupt his schedule and pay attention to the presence of God.  God didn’t force him to stop, no burning wall in front of him.  It wasn’t an obligation.  He had people to see, sheep to herd.  He could have looked away.  He could have glanced once in his rear-view mirror, hoping he might have another chance someday when things were a little less hectic.

At Calvary we have been talking about the WORD.  I think one of the difficulties we have in hearing God is that we have no divine curiosity and everything else is jockeying for priority in our lives.  God’s Word is just another one of those things we need to fit in, check it off the list.  We think it’s a no-brainer, if I had been there that day I would have stopped to check out the bush.  But would we have stopped?  Or is it the case that in the busy pace of our lives, in the midst of a secular society, many of us have become so preoccupied, so busy, that we might run right past a burning a bush and not even stop long enough to find out that it’s holy ground?