As I said in a previous post (Passion of Christ) last week I was part of a panel discussing Mel Gibson’s movie The Passion of Christ. One of the men on the panel — a wise, likeable guy — was Rabbi David Ostrich.  In the course of bringing a Jewish perspective to the movie he said words that I have been pondering ever since.  I can’t quote him exactly but my paraphrase is something like this…

In other words, the cross was not only a device of torture and death, it 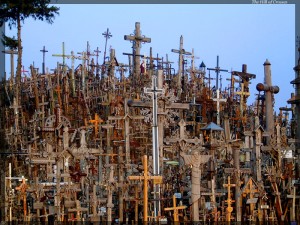 was common. It was as common then as it is now.  For example sometime between 73-71BC, a rebel slave revolt led in part by Spartacus resulted in the crucifixion of over 6000 slaves along the road between Capua and Rome — 125 miles filled with crosses.  The cross was common.

I needed to hear that.  I wonder — please don’t label me a heretic — if we have put so much emphasis on the suffering that Jesus experienced on the cross that we have missed what made a common cross — an UNcommon cross.  What makes Jesus’ cross an uncommon cross?

3) It was not the end.  In the case of every common cross experience up to the cross of Jesus, the cross was the end of the story.  In Jesus’ death was a “deeper magic” than the world had ever known.  I’m using a term from C.S. Lewis’ Narnia series.  In the first book (or movie) after Aslan — the representation of Christ — is killed on the great stone table, he rises from the dead.  When he appears, the stone table splits in two. Lucy and Susan ask Aslan what it all means.  Aslan says,

It means, that though the Witch knew the Deep Magic, there is a magic deeper still which she did not know. Her knowledge only goes back to the dawn of time. But if she could have looked a little further back, into the stillness and darkness before Time dawned, she would have read there a different incantation. She would have known that when a willing victim who had committed no treachery was killed in a traitor’s stead, the Table would crack and Death itself would start working backwards.