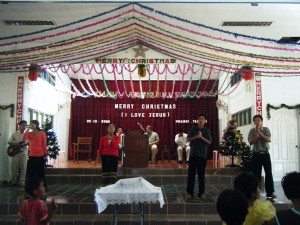 Six years ago, our family celebrated Christmas in an orphanage in Myanmar. We didn’t do any family gifts (the trip was our gift to each other) which was a bit of a struggle for kids aged 12-17, but in the end it ranked as one of our top Christmas Days ever!  Not only did we give gifts to well over 100 children, but I also had the opportunity to preach a gospel, Christmas message to 1500 villagers. You may not remember this but you (people reading this blog and the Calvary family partnered in our Myanmar Christmas to provide a meal and the rice for two more meals to everyone who attended.  (In fact that was probably the main reason they came, since my preaching is not really a huge draw in Myanmar!)

That year one of the people who heard the gospel was a man named Mynt Shwe, a Buddhist monk whose sons were in training to become monks. That year Mynt Shwe accepted the gospel and now he is a full time missionary to the Buddhist people. This year our family is going back to Myanmar for Christmas and on December 27th we will be sharing the gospel with (and feeding) about 3000 of the villagers whom he has been serving. I love it when God brings things full circle, almost like He had a plan!

The needs in Myanmar are so great. Poverty is off the charts, children are abandoned with regularity, thousands of children as young as 10 have been forced to serve in the military, and very little is invested in the education of the next generation. To add to those realities, in recent years, Myanmar was the number one producer worldwide of meth-amphetamines, and number two in opium production. Making matters even worse is the fact that Myanmar ranks among the lowest countries in receiving international aid.

Then we come to the church, the hope of the world. The church in Myanmar is often marginalized and in some parts of the country persecuted and the Burmese Buddhists rank as one of the largest unreached people groups in the world. Yet in spite of all those obstacles, God is doing amazing stuff in Myanmar! Buddhists priests are leaving their robes behind for the cause of Christ. Children are being taken in, nurtured, educated and given new hope for their future. Christian schools are being built, unreached villages are discovering living proof of a loving God and we have a part in all of that. 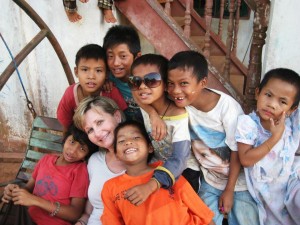 This year 10 of us will be in Myanmar for Christmas. We are raising money to give a Christmas meal and the gospel to over 5000 people and give Christmas presents to about 160 children. If you would like to be part of what God does this Christmas. Just click the link below (or if you are at my blog, the link to the side).

I am praying you have an unrivaled Christmas!